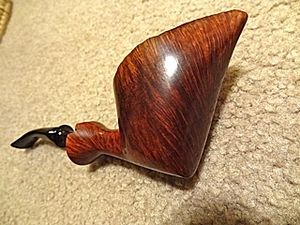 But all the same, Celius wasn't able to make this periodically big success an enduring success. If this depended on mercantilistic deficiencies or if the often claimed minor quality of the bulk of his pipes caused the decline, will presumeably remain an unanswered question. As well it mustn't be disregarded that there were mighty - if not superior - concurrents in the field of mainly machine-made semi-freehands like the manufactures of Erik Nørding, Karl Erik (†), Preben Holm (†), Søren and others more. Celius moved away from Bogø around 1970 and sold his shop and the Celius name to a man named Randsborg who continued with the business until 1975-76, when he closed the shop. Durring this period some of the Celius pipes were also stamped "Randsborg". 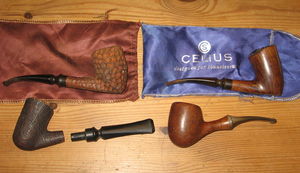 Courtesy, Stig Andersen: These these pipes have no stamps but the bottom right pipe was made for him by his father, Henning, and is not a Celius model. The finish of the pipe in the upper left and was made with a drill and then sandblasted, the same finish as the Grade 2 Fantasy pipe in the gallery bellow

Shortly after Randsorg closed the shop, Celius returned to see if he could make another go of it. One of Celius's original employees was a pipemaker by the name of Henning Andersen who worked part time with Celius during his second run in the business. Andersen's son, Stig related an account that his father helped with the Celius pipes as well as a small production of handmade pipes for Stanwell. Anderson also worked along side Celius from the beginning on Bogø and later for Randsborg, making many of the fantasy pipes and other handmades. Many thanks to Stig for his help with this information.