Update: We are sad to report that it has come to our attention that Tommaso Spanu passed from this World in the Fall of 2015 to join the many great Italian pipe makers that came before him. Our hope is that Tommoso's sons and brother will continue the Spanu pipe making tradition. We can also enjoy the legacy he leaves in the many pipes he has made over the years. 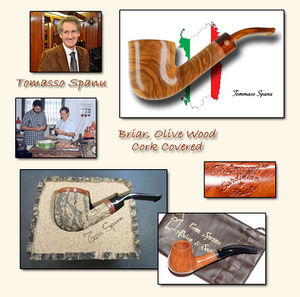 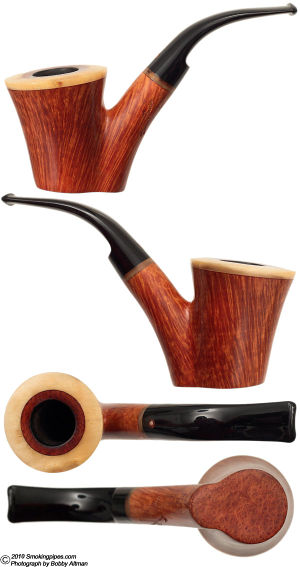 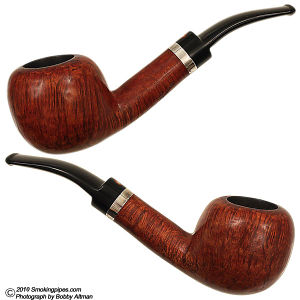 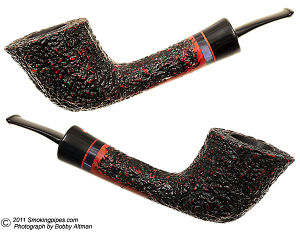 11In 1963 Tommaso Spanu left his home in Sardinia and wandered to Northern Italy to become a pipemaker. His uncle had managed an apprenticeship for him in Gavirate, in the province of Varese, with it's many pipe manufactures. His exceptional talent soon attracted the attention of Alberto Paronelli (→ Paronelli), the grand seigneur of Italian pipe business. Paronelli, a famed pipe designer himself, arranged that the best pipe craftsmen schooled his young fosterling and personally taught him in pipe design and styles. Soon Spanu reached a remarkable level of skills and began to work on the Clairmont pipes, a high-grade brand produced for and distributed by Paronelli. A little later the bulk of the Clairmonts was made by Spanu who was even allowed to stamp them with his own name additionally.

All in all Tom Spanu spent 16 years in the North where he worked with many other famous pipemakers like Guiseppe Ascorti and Luige Radice e.g. In 1979 he finally felt it was time now to continue on his own. So he returned to Sardinia where he established his own workshop with some help from his brothers. A firm was founded to market the pipes, the Novarte S.N.C. di Spanu Tommaso. Furthermore he purchased a lisence from the local government and following Spanu is the only pipemaker worldwide who grows, harvests, mills and conditions his own briar!

Today his brother and two sons carry on the family tradition, making more than a thousand pipes a year. Mostly more classic models for Italy, but also a good amount of more stylish designs for the foreign markets. Now, if it comes to talking about "entirely handmade pipes" ... Just as when Tommaso started carving pipes, only hand tools are used. Not a lathe or drill is to be found in his workshop!

Around 1997 Spanu was approached by Mercedes-Benz and asked to design briar-burl dashboards for their most luxurious sedans. And he replied "Maybe tomorrow!" We can assume that the envoys looked quite dumbfounded to be turned down that way, and so Spanu explained that while the project would be fun, his first love was pipes, and only once he was not making as many pipes he would consider it. Mercedes-Benz is said to have taken the rebuff in good nature, and even this automobile manufacturing giant is still waiting on Mr. Spanu to finish some pipes.

Beside the all-briar pipes Spanu loves to work with a wide variety of others woods ranging from the traditional olivewood to beech, oak, boxwood and juniper. He often produces hybrids composing different woods.

As far as known Tommaso Spanu is the only pipemaker who regularly, though quite rarely, made pipes out of lemonwood. Apart from the very attractive and distinctive color of the wood (often white to light yellowish like a smoked meerschaum, with grain), these pipes are claimed to be absolutely wonderful smokers and compare to briar in their smoking quality. Unlike other types of wood, they are quite resistant to heat, porous and don't compromise the taste of the tobaccos in any way.

These pipes are additionally stamped "LIMONE" ("Lemon" in Italian).

However, if there is somewhat of a Spanu signature and his trademark, it's the Sughero, the pipes (of briar mainly) covered with the bark of the Cork Oak (Quercus suber). Also, in a small way, this pipes are a tribute to the local craftpeople of Sardinia, who work extensively with cork.

The Sugheros are comparatively light-weighted and to feel the texture of the cork is just wonderful!

An excellent selection of Spanu pipes is available at Pipedia Underwriter, lepipe.it
Retrieved from "https://pipedia.org/index.php?title=Spanu&oldid=37273"
Categories: