I recently acquired a most remarkable pipe, a circa 1915 Dunhill ‘Duke Street’ ¾ bent, about the size of an early 120. A “DR” with graining easily the equal if not better then a 1960’s DR E or F. Dunhill catalogs evidence that in the 1910’s and 1920’s Dunhill made some exceptional straight grains but while I have had or seen a number of early DRs this pipe is the only early Dunhill I have actually seen with ‘catalog’ quality graining. 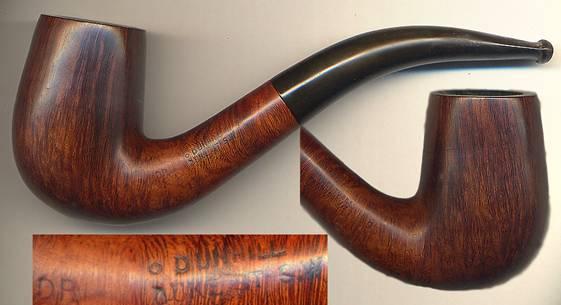 But beyond its beauty I have found it to be a most interesting pipe. First, it has unique nomenclature, specifically a small oval ‘stop’ before the DUNHILL stamping. As you may recall in an earlier Ephemeris I reported that based on catalogs and a survey of collections, it appears that up to the mid 1920’s Dunhill had three DR grades indicated by small square stops before or after the DUKE ST or LONDON stampings and for the highest grade after the DUNHILL; that in the mid 1920’s a fourth grade was introduced indicated by a square stop before DUNHILL; but that, I speculated, even before that fourth catalog ‘super’ grade was formally introduced there probably were always ‘special’ pipes priced above the then highest third grade. The exceptional straight grain pipe in hand with its oval rather then square stop before rather then after the DUNHILL stamp would seem to bear out that speculation. 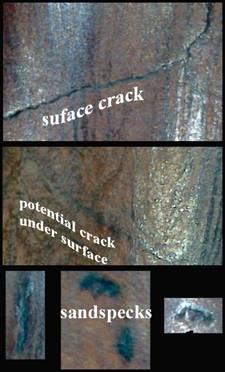 But if the graining approaches perfection, the pipe does not. In fact it has a hairline surface crack running horizontally across half the bowl. Most interestingly it must have been there from the beginning. There is for instance no discoloration indicative of a post sale ‘heat crack’ brought on by over zealous smoking. Moreover, a close inspection of the ‘clean’ side of the bowl shows a potential continuation of the crack just below the surface. This leads me to suspect that in the final sanding and buffing of the bowl the flaw was just barely exposed on one side and left just barely protected on the other, and that when the pipe was initially smoked the exposed crack opened up just enough to make it apparent. If that isn’t enough, as I looked at the pipe closely, I note a three or four natural ‘sand specks’ (as opposed to later smoker made ‘dings’).

But what intrigues me the most is that this pipe with its spectacular grain and regrettable flaws was most certainly reviewed, approved and likely as not, sold by AlfredDunhill himself. In this regard I am reminded of the recent controversy in collector circles over the revelation that some of the very finest modern day continental carvers ‘touch up’ sand specks in their pipes. For in the mid 1910’s the small Dunhill shop on Duke Street was far more akin to the small businesses of those modern day Continental carvers then to the world-wide mega tobacconist it was to become beginning just a few years later.

A decade later most assuredly, if ever so reluctantly, the pipe in hand would have been ‘graded out’ because of its flaws, consigned to be stamped and sold as a Parker given that the bowl walls were hardly thick enough to attempt a switch to the Shell finish. But for a fledgling pipe shop a pipe like this was no doubt far too valuable to be just set aside. All of which brings us full circle back to the nomenclature, and a question. While we can be comfortable that placing the stop before the DUNHILL was indicative of its beautiful graining, was the use of an oval stop accidental or was it intentional, to warn of flaws. I don’t suppose we will ever know, but I suspect that if we were but able to ask Alfred Dunhill today, he would still remember the day a century ago he first held this lovely pipe in his hand and faced the difficult decision of just what was to be done with it.