Dunhill's most prestigious line, the "Dead-Root", is filled with many controversies, but certainly has its place in the sun. Among the connoisseurs of the brand, this is a very desired series. In addition to the pieces that were made under the management of Alfred Dunhill (until mid-1928) and limited in number, the D.R. has a special place in the heart and collections of nearly all Dunhill collectors. 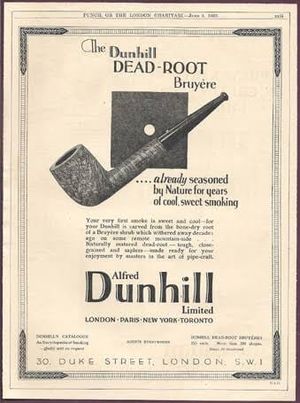 Beginning by at least 1915 if not earlier (perhaps as early as 1910) Dunhill stamped straight-grained Bruyeres, and later straight-grained Roots, "DR" on brand side of the bowl at the place where one would normally find an "A" or "R". "DR" stood for dead root a term used to refer both to that part of the briar from which most quality pipes, including Dunhills, are made and to a briar burl that was dead before it was harvested. Initially, however, there was an additional distinction conveyed in the "DR" stamping beyond graining since prior to 1920 DR's were hand-cut in London from burls while most Bruyere's were only finished in London from French turned bowls.

While to some extent the straight-grained DRs may be the result of spotting the grain in the course of the early production process, the common statement that 'DR's are rare because they supposedly occur by accident in the course of standard shape production is incorrect. In fact, most "DR"s are derived from inspecting raw briar for straight grain prior to production or specifically purchasing the same and when so found or purchased selecting or specially designing a pipe shape to best fit the grain.

As the Bruyere was Dunhill's only smooth finish prior to 1931 all early DR's are necessarily Bruyeres," The Root finish was put in production in 1931 specifically because the company desired to have a better grained naturally finished pipe in the line and in 1932 DRs became associated with that finish. Prior to 1932 DRs were stamped simply "DR" but with their introduction, Root DRs were stamped "DRR". Presumably, the second "R" signifies the Root finish. Since I have seen no examples I do not know if Bruyere DRs after 1931, if any, were stamped "DRA" but I suspect that at least for a brief time there may have been such and if so, were so stamped since otherwise the second "R" in the Root DR stamping would have been unnecessary.

As discussed in connection with the "A" stamping, prior to the war, if not after, up ticking in DR pricing was apparently signified by square subscript stops. In addition it appears that early DRs dating from the 1910s to the early 1920s were stamped with a one or low two-digit number on the shank next to the bowl (where the shape number normally appears) which appears to be some sort of category (as opposed to shape) number, either price or shape related. (I suspect it was the latter, perhaps the forerunner of the initial Shell stampings in that regard.) The Dunhill catalogs of the 1920s through 1931 consistently show four DR price categories but the precise stamping code to indicate the different price levels is presently unknown. Presumably, there were differing price groupings of the Root DRs in the 1930s but number of such and stampings indicative of the same is presently unknown. In the 1950s Dunhill began grading DR's "A" through "J", "J" being the finest. I have seen a 1957 DR stamped "DRR" followed by a horizontal "H" presumably signifying the "H" grade but I do not know the significance, if any, of the horizontal manner of the stamping. In 1979 Dunhill changed it's DR letter grading system to stars running from one to seven stars underneath the "DRR" stamping with seven being the highest grade and also introduced a DR over XL stamp, presumably to denote larger pipes. Loring, J. C., The Dunhill Briar Pipe, The Patent Years and After (self-published, Chicago, 1998).

The Dead-Root brought a stronger grain feature to the already well established "Bruyère". The D.R. models are perfect, made with the best Briar available and that is – compulsorily – "Straight Grain". They are rare models of considerable value, which vary according to the graduation of the grain, and can fetch easily 1k USD on the estate market. Over the years, Dunhill has established a classification system based on the aesthetic aspect of this product, using alphabet letters and a variable number of stars (the first stars appeared midth 1970's).

The criticism emphasizes that it is only a question of marketing. However, it is interesting to know the minutiae of this model and to understand what earns a Dunhill the "Dead-Root" designation. I found an interesting consideration during my research:

Perhaps the company did come across some actual dead roots that were usable and they garnered the idea from that. However, it is unlikely that that practice continues today. A briar burl does not have to have been dug up already dead to produce straight-grained pipes. Why did Alfred state “From the heart of such roots are carved the straight grain bowls…” when the plateau or outside parts of the burl produce the best straight grains? The answer is because the outside of a dead piece of wood is decayed and cracked. Perhaps this is proof that they were using dead burls and staining their pipes dark to hide the grain. More likely though, it was the prose that got people’s attention and drew them to the “mysterious” dead root pipes. Mr. Alfred Dunhill created a product that stood out and, to this day, surrounds itself in mystery and mysticism. MrHolmes’ Weblog - Dunhill’s DR stamping: Dead Root or Extra Stamps

The Dead-Root designation is tied to the type of Briar, which was reportedly "naturally cured" for hundreds of years while it was "dead." They speculated that the maturation process would begin shortly after the death of the tree, where the briar would sit undisturbed for decades - that only this way is it possible to obtain the exceptional grain that is required by the series. However, experts oppose this idea by arguing that as soon as the tree dies it immediately begins to decompose, and therefore would be completely unusable in a short period of time. Furthermore, the grain is developed in the briar as the tree grows through the seasons. It is certainly not developing additional grain character when it is "dead", although it is likely changing in other ways as it cures.

Then there are the straight grain designations, perhaps the ne plus ultra of pipe collecting. With Alfred Dunhill, this category takes on a whole new aura of exclusivity. The rarest straight grains are stamped DR (which stands for “Dead Root,” referring to the underground burl of the heath tree from which the oldest and usually best-figured briar is cut). Currently, the DR series ranges from one to six stars; the more stars, the tighter and more uniform the grain. Beyond that, the DR designation ventures into the stratosphere of rarity with alphabetical letters, starting with DRG, and the even scarcer DRH.

Although very few DRHs have ever been produced, just such a bowl was recently uncovered as it was being hand-turned from an ancient burl, which proves that rarity is not just locked in the past. This particular pipe may very well end up being the most valuable Alfred Dunhill briar ever created. It is an exquisite Root Briar Oversized Dunhill straight grain DRH (the first DRH produced in recent times) that has been crowned and banded with 10 karats worth of diamonds that have been set into a platinum bowl rim and band. Even the presentation box that houses and protects this pipe is uniquely designed, with a weighted base that acts as a counter-balance when the lid is lifted. As of this writing, there is an attempt to get this platinum and diamond-studded Alfred Dunhill DRH acknowledged by The Guinness Book of World Records. With an estimated value of $150,000, it stands a good chance of receiving this recognition. Alfred Dunhill: Preserving the Gentle Art of Smoking By Richard Carleton Hacker - SMOKE - Spring 2002

So, while it is clear there are some doubts as to what makes Dead-Root briar exceptional, there is little doubt about it being extremely special in both beauty and smoking characteristics. The mystery and uncertainty make these exceptional pieces even more interesting to enthusiastic collectors of the series.

In his poster, Dunhill advertised the product with the following:

"Cured by nature for hundreds of years, which results in a dry and dense wood, providing a unique flavor to tobacco."

Loring also mentions in his book: I might also note that if Alfred Dunhill is to be believed in 1910, the year Dunhill began pipe making, was also it's best year by far for straight-grained pipes, for quoting from Dunhill's first "About Smoke" Catalogue:

Thousands [emphasis added] of Straight-Grain Bowls [are] always in Stock, including many absolutely perfect specimens... These Straight-Grain Pipes are not selected from ordinary French briar bowls, but specially carved from roots over 120 years old, and are really marvelous specimens.

Up to 1948, the classification used was only to set prices - four DR price categories (but the precise stamping code to indicate the different price levels is presently unknown). In mid-1949, they began to be sorted with letters from the alphabet (ascending) from "A" to "J" to classify the grain. In 1974, when first stars appeared, the star was to indicate the size, but soon this group classification was changed to grade. There are cases in which the "A" was printed and, shortly after, was reconsidered and printed a "B" to improve the classification, getting both printed on the shank (A 2 B). They say that the qualification of the grain depends on the mood of the person doing the evaluation because there are cases in which a classification "A" has more personality than a classification "D", for example. The easiest classifications to find are between "A" and "E", with from "F" to "J" becoming much more difficult to find.

In 2000, a new D.R. series was launched with stronger grains, called "Flames", and they follow the same criteria, but classified with "flames" instead of stars.


Twice a year, a very special batch was separated to be classified by the company's chairman - only the best pipes among the best were separated for that purpose. This selection began with Alfred H. Dunhill (the exact date is unknown) and ceased with Richard Dunhill. In these situations, additional stamps were applied, which said: "Specially Selected By" and the Chairman's signature.

Mr. Hener told me that he found an internal memorandum dating from 10th June 1974, stating that:

As from 7th June, all straight grain pipes are to have an additional marking which will be as follows: Stamps have been ordered.

From 1997 to 2000, PipeSMOKE was published as a printed supplement to Lockwood Publication's SMOKE Magazine. There was also a PipeSMOKE website. The magazine stopped printing over ten years ago, and the website no longer exists. PipesMagazine.com is pleased to bring you the archives of PipeSMOKE in cooperation with Alan Schwartz, the former Associate Publisher & Editorial Director of the magazine. In this case, we have an article about the Dead Root selection, made especially by Richard Dunhill. Here Dunhill’s Natural Selection, Pipes Magazine - September 18th, 2014[1] it's possible to understand better the criteria of the selection process.