Written by Jan Andersson, from The Pipe Club of Sweden website 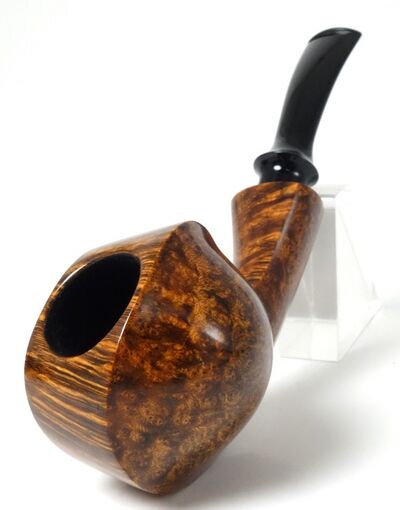 I met Andreas Bennwik for the first time at the Tobacco & Match Museumin Stockholm, when they opened an exhibition called Swedish Delight. That was about two years ago and at that occasion, Andreas brought some pipes he showed to me. Perhaps they were not technically perfect, but it was easy to see that this young man had a sense for design and form, so I was looking forward to follow his progress. Later I saw some of his pipes on the internet and was impressed. When I last spring heard that he was about to spend some days with Tom Eltang in Copenhagen, I took the opportunity to meet him there. It is much simpler for me to go to Copenhagen than to Stockholm, where Andreas is living.

Andreas (*1979) was born in Stockholm and has stayed there since. Ever since he left school he has been working as an illustrator, mainly making advertisements but also with covers for books and CD: s. About ten years ago he got interested in pipes and the first pipe, a VAUEN, was bought during a trip to Berlin. However, this first meeting with pipes and pipe-smoking was not entirely positive (maybe it was the choice of tobacco that was wrong), so it only became a few pipefuls now and then. A few years passed, and then Andreas started to search for pipes on the internet. There he found a lot of pipes, some of them he thought were beautiful, some not. But he also found a lot of tips, how to make a pipe with the use of very simple tools.

His first step was to buy a collection of used pipes at an auction and he started renovating them. The adventure seeing a much-used pipe being transformed into looking almost as new, strengthened his desire to make some pipes of his own. The ambition at that time only was to make a few pipes to smoke himself. He bought some predrilled blocks and got started. But soon he realized that to get more freedom in the choice of model and a greater possibility to take advantage of the grain, he had to use blocks that were not drilled. However, at that time he did not have a lathe of his own, so he had to use pre-fabricated tenons from Delrin. Andreas meets other pipemakers Two years ago Andreas was on a trip to the southern part of Sweden and at that trip, he visited the pipemakers Sara and Love Geiger. He got many valuable tips from them and at the same journey, he also paid Tom Eltang a short visit. These meetings made him confident that he wanted to make more pipes, and he understood that the first thing he had to do was to buy a lathe. Shortly after that journey, he did so.

The contact with Tom Eltang resulted in that he last year spent four days in Tom’s workshop and learned the basics in pipe-making. So when I now meet Andreas, it is his second visit to Tom and also this time he was to stay for four days.

Andreas is most enthusiastic about this opportunity to work in Tom’s workshop. And it is not hard to understand. Here he has a master to ask for advice, and in the workshop there is plenty of space and all the tools and machines needed. Just space is a little problem for Andreas. In his flat at home he has an extremely narrow room for his workshop and because of that, he cannot have all the machines he wants to. The dream is to get the opportunity to move into a house of his own in the future.

Classical shapes are favorites Those of Andreas’ pipes I have seen are small to medium in size, which is the size most pipe-smokers in our part of the world prefer. Most pipes are made from briar and ebonite and have no adornments from other materials. However, sometimes Andreas uses bamboo or horn, but not very often. “Shall I use any other material, it has to have a purpose”, as Andreas himself says. And of course, he is right there. Adornments have to bring something to the pipe, it must be a natural part of the shape. The pipes I saw at my visit were smooth and most of them in the classical shapes. Andreas tells me that he has made a few rusticated pipes, but that he has not tried sandblasting. However, I am confident that he will try that too in the future, when he has more space for his workshop. Briar – a fascinating material That Andreas has a pronounced sense for form is not surprising, considering his profession. However, he says that working in a living material like wood was new to him. But he is fascinated by the possibilities this material brings and also by the challenge to master the difficulties it offers. The last day of his visit to Copenhagen was spent in the Danish Pipe Shop in central Copenhagen, to show his pipes to interested customers. I had no possibility to be there then, but I am confident that it was a success. His pipes are really worth it. And I am sure we will have reason to come back to him and his pipes in the future.

Andreas is no longer making many pipes, and is currently unable to take new requests or reply to questions.