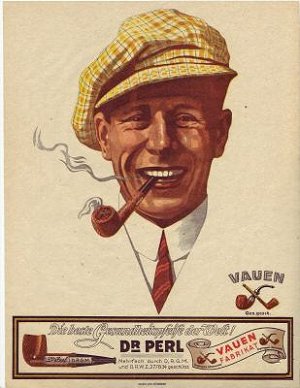 In 1848 Karl Ellenberger and his partner Carl August Ziener turned an idea into reality in Nuremberg. In the first German pipe manufacturing company they produced tobacco pipes from selected woods for connoisseurs throughout the world.

The Vereinigte Pfeifenfabriken in Nuremberg (known in short as VPFN) was brought into being in 1901 with the amalgamation with the Gebhard Ott pipe factory founded in 1866, also in Nuremberg. In this way a business was created under the management of Ernst Eckert, a scion of the founding family Ott, and its products and services were to attend and shape the culture of tobacco and smoking in Europe and overseas for a long time - for 150 years now.

In the 1920s, VAUEN had taken out a trademark on a white dot on the mouthpiece for Germany and Austria, at the same time that Dunhill had done the same for the international market. The companies ended up in court with the result that Dunhill may use the white dot internationally, whereas VAUEN may use it only in Germany and Austria and has to use a differently-coloured dot for all other markets. They have used light blue and grey dots internationally since then. The white or coloured dot denotes the higher quality pipes of VAUEN; the lower-end pipes are only marked by the VAUEN imprint on the stem.

In the search for a term which would be easy for all pipe friends to remember and not confuse with anything else, Ernst Eckert's son, Adolf Eckert coined a new name for the business in 1909.

VAUEN, consisting of the initial letters V (pronounced VAU) from Vereinigte Pfeifenfabriken and the N (pronounced EN) of Nuremberg. A brand name for the future had been created.

After 1945 Ernst Eckert, son of Adolf Eckert, succeeded in overcoming the destructive effects of the war with an unshakeable pioneering spirit. VAUEN grew to become a business with a world-wide reputation once more.

Alexander Eckert, now the fifth generation of pipemakers, has been at the head of the oldest German pipe-manufacturing company since 1982. The company, which has been in the hands of the founder's family since it was established, is expanding again in importance as a result of increased international commitment.

The two decades after World War I. saw a worldwide race concerning the development of pipe filters and system pipes being extolled then here like there as the "ideal health pipe". VAUEN was one of the first manufacturers to introduce a simple paper filter in 1921. Purposeful further research and development led to the Dr. Perl junior activated carbon filter with a diameter of 9mm first shown in 1934 as a world novelty.

An overwhelming success! The slogan "Ein heller Kerl raucht nur die echte Dr. Perl!" i.e. "A clever chap only smokes the original Dr. Perl!" worked well. In the course of the time - especially in Germany - more and more pipesmokers wanted to be a clever chap. Therewith VAUEN authoritatively started a process leading to the fact, that today clearly over 90% of all pipes sold in Germany are accommodated with 9mm filters. Other pipe manufacturers practically are forced to adapt themselves to that.

Today’s further improved version Dr. Perl junior System filter plus is the best-selling 9mm activated carbon filter worldwide. VAUEN annually sells approximately 150 million filters, a notable addition to the pipe business. Since 1968 most VAUEN pipe models have been equipped with the Conex system. A conical shaped end of the filter chamber in the mouthpiece ensures an exact seat of the filter and hinders the smoke from passing by the filter. However, there are at least some VAUEN pipes made after 1968 that do not include the Conex system. Meanwhile, several other pipemakers have adopted the Conex for their filter pipes, notably Stanwell, Bjarne and, in part, Brebbia.

If you have specific interest or information on VAUEN pipes, please contribute to this article, or send it to sethile.pipes@gmail.com and we can add it for you...