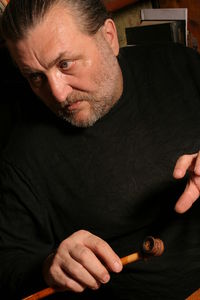 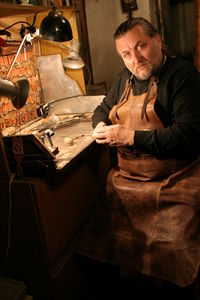 Vladimir Ershov at his workbench 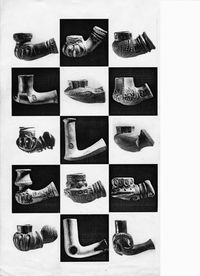 Pipes made in the tradition of those found outside of Tanais 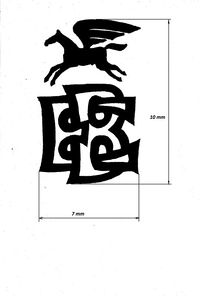 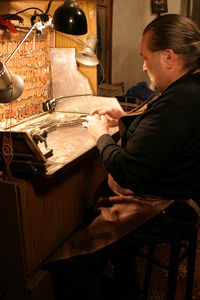 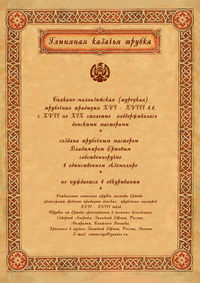 Vladimir Ershov was born in the Russian city of Voronej in 1949 to the family of a naval officer. Vladimir traveled quite a lot in his youth, living in many cities as he worked as a milling machine operator, builder, digger in archaeological excavations, and as a stage designer. In 1975 Vladimir returned in Rostov-on-Don and discovered ceramics. In 1980, after several years of experimentation in plastic art and composition, he came to the Asia Minor traditions of 17th century clay pipe manufacturing. This art form might have been irretrievably lost when the last master pipe makers died, and along with them, the skills and tradition. To recover this lost art, Vladimir worked with painstaking effort in museum storerooms to determine the techniques, details, and secrets of the ancient masters. Between 1980 and 2014 Vladimir made more than three thousands clay pipes. He started using his personal stamp in 1995. At present, this new master of the art is working on a made-to-order basis for private clients and museums. Vladimir himself is an eminent collector of pottery clay and period pieces.

Pipes by Vladimir from 1990 to 1995 for museums in the Czech Republic, Japan and other countries. Made in the authors style and the Balkan-Asia Minor tradition, such as those discovered in archaeological digs outside the ancient town of Tanais [1]: