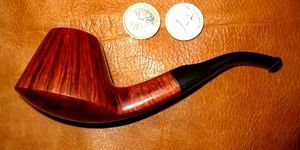 Late in 1977 or early in 1978, so the story goes, a young man from Bremen, a university student, dressed in faded trousers and worn out shoes travelled through the northern areas of Germany carrying a scuffed up brief case full of pipes he humbly offered for sale to some considerable tobacconists. Maybe, this is a bit too much of folklore. Hasso Baudis, that’s the young man’s name, finally found a dealer in Hamburg, who agreed to store some of his pipes. We don’t know who bought the first Hasso Baudis pipe, but the following hype is fairly beyond comparison.

Later he was contracted by Tuxedo company, distributor of Dunhill, Stanwell and other renowned brands in Germany. Issue 3/1981 of Pipe Club (German magazine) enthusiastically celebrated Hasso Baudis, aged 26 at the time, at the peak of his fame. But less than two years later (Pipe Club 1/1983) he had left the stage disappearing into some foggy nothing causing the wildest speculations about possible reasons. He had sold his workshop to architect and designer Robert Mewis whom he had introduced to the art of pipemaking before. Baudis later worked as an architect. 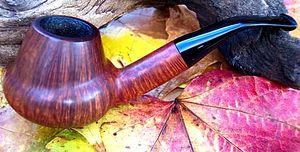 Hasso Baudis is cheered to have made some of the most creative pipes in the merely five years of his active time as a fulltime carver. He made many innovative shapes from first-class wood combined with first-class finishes covering the whole spectrum of reddish colours and very good mouthpieces. As Rainer Barbi once mentioned, his wealth of ideas deserves admiration.

He also experimented with pipes which were more on the “designer side” using acrylic tubes or large elements of metal. The most spectacular pipe he made was shaped like a swan with wings made of pure white gold. It’s said to have asked a retailer’s price of more than 100,000 DM.

How many pipes Baudis made is subject to speculation. Estimated between 1,000 and 1,200 pipes. He is reported to have worked very briskly. His earlier ones were stamped “Hasso Baudis”. Before 1981 he changed to “Hasso”. The most precious pieces had a diamond representing the "o" in Hasso.

Today Baudis pipes range among the rarest finds in the market of high grade estate pipes.