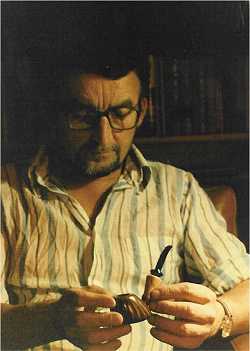 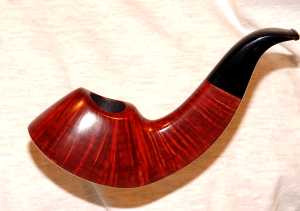 Jens Holmgaard was born in 1937 in Slagelse, Denmark. He was a trained woodwork teacher in Stenlöse Youth school between the years 1976-1993. Jens lived, and had a workshop, not far from Sixten Ivarsson´s and could actually see into his workshop windows.

Jens was always much interested in art and sculpture and through his friendship with Sixten he was able to learn to make pipes.

During the years 1980-1995, Jens made pipes under the guidance of Sixten, but he could never bring himself to sell any of his pipes, nor did he ever stamp his pipes with his name, even though he prepared to do it. In the middle of the 90´s he grew weaker from illness, so it never happened.

Jens passed away in 2004 and his brother took care of his pipes and contacted Lars Ivarsson who advised him to contact Per Billhäll to sell Jens' pipes.

His pipes are very well executed with remarkably good briar and show a lot of ceativity. Although you can see the influence of Sixten, Jens also developed a style of his own. Because of the scarcity of pieces made and the special relationship to his friend Sixten Ivarsson, the Dean of Danish pipemakers, Jens' pipes are very collectible.