From Pipedia
(Redirected from Ilsted)
Jump to navigation Jump to search 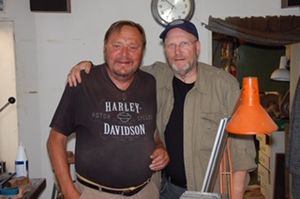 Note: Poul Ilsted passed away in May of 2017. The following remembrance from Rex Poggenpohl serves as a wonderful obituary for his many friends and admires in the pipe world. --sethile (talk) 14:15, 15 June 2017 (CDT)


Poul Ilsted Bech was one of the finest craftsman to ever make a pipe. Tom Eltang took me to meet Poul at his home/workshop in Svendborg, Denmark around 2001, in the early part of my visiting Europe every year to recruit famous Pipemakers to attend the Chicago Show. Poul never attended University, but was one of the most intelligent persons I have ever known. He was interested in many things, including World War II history, American Blues and Jazz, British sports cars and Motorcycles, red wine, etc. His command of English was impressive and he was a voracious reader. We exchanged letters several times a year on many topics of mutual interest, I would send him books in English on favorite subjects that he could not find in Denmark and he would occasionally send me a pipe. I will miss him dearly. 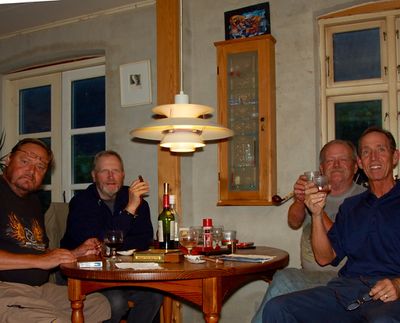 Poul finally attended the Chicago Show a couple of times with Manduela Ruger-Kusk, his long ago apprentice and long time friend. I was able to visit Poul in Svendborg a number of times, enjoying his conversations and watching him demonstrate things in his workshop after he moved some of the many empty wine bottles out of the way. The last time I visited him and Mandu in Svendborg, I was showing Denmark to Chicago area collector Carl Knighten and we were going next to visit pipemaker Peter Heeschen, a friend of ours. Poul heard that I was planning to leave Carl with Heeschen while I drove up to Laesso Island to visit with my pipemaker friend Anne-Julie, so he decided to come along with a "box" of fresh red wine to sample in the rental car! After a couple of very nice meals cooked by Heeschen and overnight at the Heeschen house, Poul and I drove to Anne-Julie's to visit and spend the night. Tired from driving I retired early to leave Poul and her talking and drinking wine, so Anne-Julie told me to help myself to the refrigerator when I got up in the morning. When I went down to the kitchen in the morning, Poul and Anne-Julie were sitting at the breakfast table, Poul in his underwear drinking wine and her in her night gown drinking juice, two of my favorite people.

Poul was known for his stylized shape Bulldog pipes and other faceted shapes of his design. He was the absolute master of shaping, faceting and finishing pipes on the flexible band sander and he was very fast in doing it. In addition to Ilsted, most of the makers who worked under Former at W. O. Larsen could work very fast as they had a quota number of pipes to complete each week and could work on their own pipes if finished early. Poul will be sorely missed by the handful of collectors of his pipes and the friends who knew him as a great pipemaker and great person.

Poul Ilsted Bech is recognized to be one of the world's best pipemakers, but except for recent visits to the Chicago Pipe Show, he rarely shows himself. He has now – for the past 30 years – been producing these briar jewels. 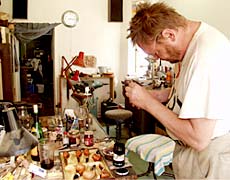 After a long time of persistent in-opportunities Poul was finally met with sympathy by the pipemaker Erik Nørding, who sold him 3 pieces of briar and offered tips for their finishing as well. After 2 weeks, when Poul showed his finished work to the ingenious pipemaker, Nørding gave him a brief, yet important praise: “Well done.” And thus Poul Ilsted’s future career was carved out.

Nobody ever taught him how to model a pipe. He learned by doing. Poul read everything about pipes that he could get his hands on. He studied and designed shapes. Quote: “I had the ambition to make pipes, which were more beautiful than were those of the illustrated catalogs.”

In his new occupation he first worked 2 years for Nørding, then 2 years at the newly founded pipe factory, Svendborg with Jens Tao Nielsen, and finally an additional year with Nørding followed by nearly 2 years at W.Ø. Larsen in Copenhagen.

A decade ago known as “Mr. Bulldog” 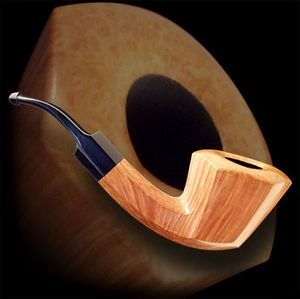 After his apprenticeship, Poul Ilsted became self-employed. In the beginning he became known for his Bulldogs (“of all possible and impossible shapes and sizes”), which 10 years ago gave him the nickname, “Mr. Bulldog”, among connoisseurs e.g. in Germany. “I have always been devoted to the Bulldog,” he stresses.

He did not really become world-famous, however, until he started making his unbelievably perfect-faceted pipes. Without envy even his most skilled colleagues grant Poul the title of honor: “The Facet Master.” Especially the finishing of a strongly curved pipe with faceted bowl and shank is, in his opinion, particularly difficult and time consuming. And if it has to be sandblasted because a small unevenness disturbs its shape, the obtainable price for the pipe will hardly make up for the many hours it took to make it.

The pipes are all manifests of excellent workmanship. Poul hates scamped work and readily admits that he is a perfectionist when it comes to pipemaking. He only uses Corsican briar from the east side of the Mediterranean island: “It is particularly densely grained and has only few defects.” 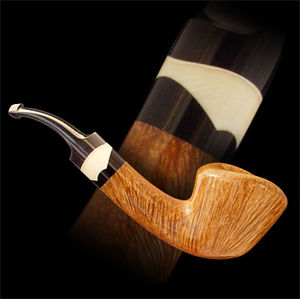 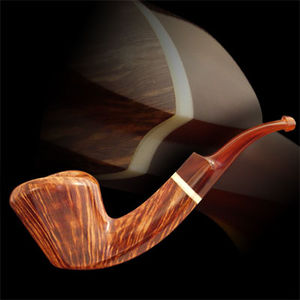 The mouthpieces are usually made of black ebonite and are (of course) hand-made. Cumberland also comes in use. Artificial amber, though, is not to his liking, as it develops toxic vapors when worked with. Only once he made a pipe with a mouthpiece of genuine Bernstein, as: “Bernstein is not necessary – it is too hard to bite on.” However, this does not prevent Poul from having a passion for the fascinating structure and biblical age of this material.

No raptures over filter pipes 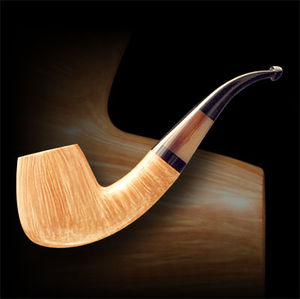 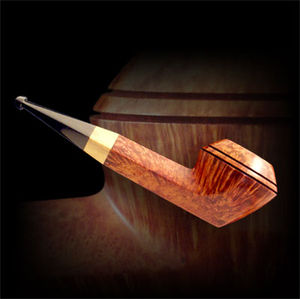 When talking about filter pipes, Poul shows no enthusiasm about the idea – on the contrary. The native of Funen occasionally makes them to order but doesn’t value this type of pipe: “The design suffers and the smoking quality is poorer, as the pipes easily get wet when smoked.” The master makes about 170 pipes per year – not even one tenth of them are sandblasted. Is it possible to live by that? “It is enough to exist,” claims Poul.

Undoubtedly he can be counted among the most officious collectors of his own noble pieces. He has made over 50 fabulously beautiful and unique pipes for himself. “I only take the best”. He also owns a Dunhill, which looks quite exotic among the exquisite collection, where one Bulldog is particularly conspicuous: It is ornamented with a silver ring densely interwoven with mysteriously shining strings of copper. With a special metalwork technique – the primitive forge is right next to the workshop – Poul mixed silver and copper. In Germany he sold only 4 such ingeniously produced specimens. “The process takes a very long time, and I get too little for my effort.”

Ilsted’s own pipes look very well cared for although some of them are quite old. How is that possible? “I always polish my pipes with a dry cloth when I finish smoking them. This makes them even more beautiful,” he finally answers. And there seems to be a twinkle of laughter in the corner of the intelligent brown eyes of this unconventional man.