Manduela Riger-Kusk apprenticed with the great Poul Ilsted in Svendborg, Denmark while still a teenager. She is noted for making very distinctive very small pipes and is one of very few pipemakers that can approach the quality of Ilsted's faceted shanks. Currently most of her time is managing props on location for Danish film and TV producers, but she still keeps an apartment in Svendborg where between movie projects she makes pipes and sculpture and visits with Ilsted.

The following information is from Scandanavian Pipemakers, by Jan Andersson 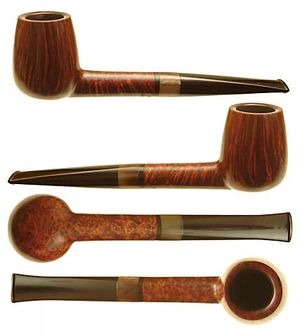 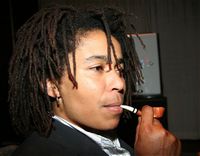 Manduela was born in 1967 in Germany, but was adaopted by a Danish familyt living in Jutland at the age of 4. They had a farm and Manduela is proud that she could already drive a tractor when she was 9 years old.

After finishing school, Manduela moved into a shared housing arrangement where she started smoking a corncob pipe. At that time she mainloy devoted her time to playing bass guitar with dream of playing at the international rock festival in Roskilde. While that dream never came true, another one did!

Manduela enjoyed pipe smoking, and wanted a better pipe. The pipes she liked were too expensive, so another dream was to make a pipe herself. In 1985-86 she was working in the museum in Svendborg and found that Poul Ilsted was living in the same town. She went for a visit and all but insisted that Poul show her how to make pipes. After that she came to visit Poul on a regular basis after her work at the museum, and her dream of making pipes was realized. 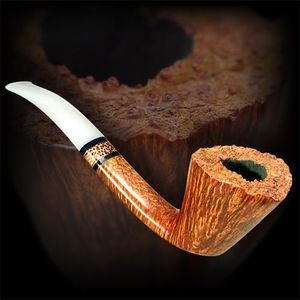 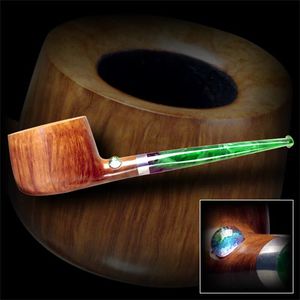 Manduela moved to Copenhagen in 1990 were she contacted Pipe-Dan, which had a pipe maker in their workshop. That position was filled at the time by Ph. Vigen, but Manduela was able to use the workshop after he finished working for the day. That last for about a year when the shop was closed in 1991. But she felt ready at that point to open a shop of her own.

She opened a shop and workshop and was centrally located and had many customers. This was both good and bad. Customers are good, of course, but they also took time away from making pipes. In 1997 she found another shop with less traffic and more time for making pipes. That workshop also had its drawbacks, however, it was difficult to heat in the winter, and Manduela wanted something better. She talked with her old mentor, Pould Ilsted about it. He helped her find a flat in Svenborg, and she moved back in 2005.

In addition to pipes, Manduela is a stage designer for Danish T.V. and film, and she also makes sculptures, often from granite. As a result of her broad interests in these projects her pipe production varies between 50 and 100 pipes annually. For stems she mainly uses Ebonite and Cumberland, imported from Germany in many different colors. Most pipes are sold in China, Israel, Russia, and the U.S. Most pipes are small, and she looks at them something like jewelry.

Manduela also enjoys competing in slow smoking contests and has won several, becoming the female champian in both the US and China in 2009. She also won the female Women's competition in 2011.