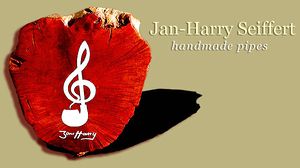 Jan Harry Seiffert is descendend from the well known tobacco import company and pipe wholesaler Heinrich Seiffert & Sohn GmbH in Kassel. Furthermore his godfather was Fredrick Henry Kapp, partner of Charles Christopher Peterson, both owners of the famous irish pipe house Kapp & Peterson in Dublin. So pipemaking was to Seiffert as if to the manner born.

At the age of 6 Seiffert spent his holidays in Denmark with Jens Tao Nielsen, a business partner of his father Detlef Seiffert. At that time Tao Nielson together with Hendrik Jørgensen (Poul Ilsted Bech had left already) headed the pipe manufacture Svendborg Piber and he became Seiffert's first master when he gave him a predrilled stummel from which little Jan Harry carved his first pipe. He was even allowed to smoke his work – until he got sick.

During the school years Seiffert discovered the music. Beside his main instrument, the electric bass, he also plays keyboard and percussion. Already at the age of 16 he regularly performed on stage and till today he is a respected funkjazz musician in Kassel and surroundings.

But back to the pipes: After graduating from school he spent some months at the pipe manufacture Svendborg Piber. Afterwards he went to Italy to learn more about pipe production in the workshops of Savinelli in Molina di Barasso / Varese. After a stopover in his hometown Kassel he went to Peterson in Dublin where he learned the high art of the silver work on pipes. He also went into design work e.g. creating the models "Hudson" und "Mycroft" for Peterson's famed Sherlock Holmes Collection.

Back in Kassel he took over the repair workshop of the fatherly company, bought some more pipe making machinery from Denmark and England and began to craft his first pipes. Seiffert had his breakthrough in the market on 1993's Intertabac Fair in Dortmund. Since then - with an interruption from 1998 to 1999 due to illness - he turns out an annual production of appr. hundred pipes and with great experimental impetus he has developed his own style. The brand's logo of this musical pipemaker - how could it be different - is a pipe linked with a clef.