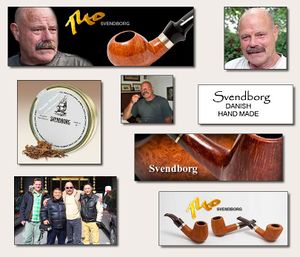 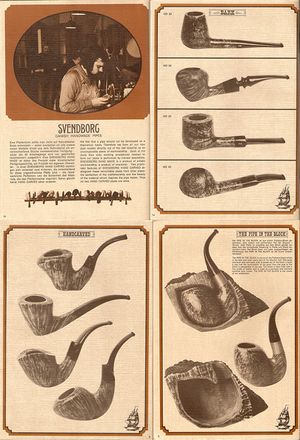 Jens Tao Nielsen and Poul Ilsted Bech met each other when working together for Erik Nørding and soon became close friends. Both felt a bit tired to make nothing but bizarre fancy shapes and agreed they wanted to produce pipes of more style and more classicism. They decided to establish their own brand "Tao & Ilsted" - But how to do it?

A good fortune brought them in contact with Henrik Jørgensen, a passionate pipe lover and a wealthy Copenhagen banker who was willing to retire from bank business and change his career to become a pipemaker. The trio joined in 1969 and decided to start a new pipe brand together. Tao Nielsen and Poul Ilsted started to search for a suitable workshop while Henrik Jørgensen took care of the finances. In early 1970 the partners found an old, closed down pipe factory in Svendborg on Funen, and bought it shortly after for a mere 16.500 Danish Kroner. It was the earlier Nordic Pipe Factory – Nordisc Pibefabriker - maybe the oldest Danish pipe factory. And now it became the home of Svendborg Piber.

The young team started with the common difficulties but success came quite rapidly after they travelled Germany in search of a distributor and met Detlef Seiffert, senior partner of Heinrich Seiffert & Sohn GmbH, a major German wholesaler in Kassel. Seiffert, insisting on high quality standards, started placing considerable orders with the new factory and began to market the brand very sucessfully in Germany. Of course Seiffert - a relative of Fredrick Henry Kapp, partner of Charles Christopher Peterson of the famous Dublin pipe house - used his international contacts to promote Svendborg Piber furthermore.

The Funen crew designed many new models for him and after a couple of months (!) they employed up to 17 people. Tao Nielsen later gratefully remembered "the big chief's whip": "Without him we wouldn’t have made it, he gave us decisive support. He was like an engine – something that our business lacks today."

But in spite of it's magnificent success the trio fell apart after less than two years, when wilful Poul Ilsted stepped out declaring he didn’t want to make serial pipes anymore, but wanted to make individual specimens... Strange enough, he approached this aim returning to Nørding!

Poul Ilsted's argumentation doesn't seem to be absolutly fair: even though Svendborg Piber turned to produce mainly serial pipes under Seiffert's influence each of the three partners was free to work on his very own one of a kind pieces as well! Since it was Seiffert's basic idea to profit from - especially - Tao Nielsen's and Poul Ilsted's creativity to design new shapes. There are many knowlegdeful collector's who confirm that these early Svendsborg pipes class among the most individual, innovating and exiting designs Danish pipecrafters created at that time.

Like many other manufacturers in Denmark Svendborg Piber used to stamp the pipes with the initials or the name of it's individual maker. (Not consequentely executed on each pipe, though!) For that purpose Henrik Jørgensen created the virtual pipemaker "Jan Hansen" and stamped his pipes accordingly "JH". Henrik Jørgensen was aware that using his own initials "HJ" on the pipes might not be a very wise thing to do in Denmark.[1]

A little anecdote: Jan Harry Seiffert, Detlef Seiffert's son, spent his holidays in Denmark with Tao Nielsen at the age of 6 years. At that time Poul Ilsted had already left. Now, Tao Nielsen gave him a pre-worked stummel and some carving tools and so young Jan Harry scrubbed his first pipe. He was even allowed to smoke his finished work - until he got terribly sick. - After graduating from school Jan Harry's first way led to Svendborg Piber where he apprenticed for some months in the pipe manufacture.

But back to Svendborg Piber's history:

The firm developed well and prospered throughout the 1970s but around 1980 dissensions between Tao Nielsen and Henrik Jørgensen occured. Tao Nielsen: "Most pipes were delivered to the United States and whereby the Americans tried to dictate us the conditions. It was not only so that their taste and their view on aesthetics were simply horrible – no, moreover they wanted that the pipes should be as cheap as possible. That did not suit my plans at all, for I strove for high quality and artistic freedom in the end."

Tao Nielsen and Henrik Jørgensen, who tended to accommodate the US customers' wishes, could not find a compromise on their different opinions, and so Tao Nielsen left the firm in 1981 and opened his own pipe workshop near the harbour of Svendborg.

Often heard, but there is no considerable indication that the pipes lost dramatically on quality after Tao Nielsen left! (As it isn't true that any facetted Svendborg must have been made by Poul Ilsted!) But Henrik Jørgensen, now orphaned, grew older and older and the charme and the inspiration of the early pipes was never regained. Henrik Jørgensen continued Svendborg Piber bravely for more than a decade on his own until he finally sold the brand to Seiffert around the midst of the 1990s.