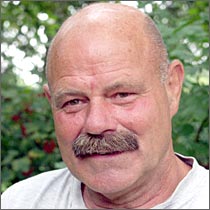 Jens Tao Nielsen has travelled the world, as could only a sailor of the old school. As a young man he put to sea and travelled the oceans. The broad-shouldered, sunburnt, 58 year-old Dane is a genuine shellback: “In those days the ships would stay in port for several days and you got to see all the strange people and places”. He feels sorry for the seamen of today. Stressed as never before, because every lay minute costs a fortune, they only find the proverbial sailor romance in novels – if they have time to read at all, that is.

Nielsen had his heyday as a sailor three and a half decades ago. After a break where he did his military service, he intended to set out on a long voyage again, but – as things happen: A beautiful girl came in the way. Our tough sailor got weak and became a landlubber. First he married and then he had to look for a job ashore.

Nielsen started as a shop assistant for Wilhelm Jørgensen in Copenhagen’s world famous shopping street, Strøget. “In those days it was the biggest and most beautiful pipe shop”, remembers our interlocutor.

For three and a half years Nielsen sold pipes there. Also those of Erik Nørding, whom Nielsen got to know one day when, very unexpectedly, Nørding offered him an apprenticeship as a pipe maker.

When Nielsen had worked for Erik Nørding for two years, Poul Ilsted Bech – the later “King of the Facetted Pipe” – came along. After a short time both pipe makers agreed: They wanted to produce pipes of more style and more classicism and no longer such bizarre shapes.

Henrik Jørgensen, who was equally ready to change his career as a banker, joined them and the trio decided to start something new together. With Fortune as their fourth player, the partners found an old, closed down pipe factory in Svendborg on Funen, and in 1970 they bought it for a mere 16 500 kroner. Nielsen says: “It was the earlier Nordic Pipe Factory – maybe the oldest Danish pipe factory.” And now it continued under the name “Svendborg Piber”.

Progress came to the young team quite rapidly after they met Detlef Seiffert, senior partner of the German Heinrich Seiffert & Sohn GmbH, who started placing orders with the new factory.

The Funen crew designed many models for him and rapidly they employed 17 people. Nielsen gratefully remembers the “Chief Whip”. “Without him we wouldn’t have made it, he gave us decisive support. He was like an engine – something that our business lacks today.”

The trio stayed together for two years. Then the wilful Poul Ilsted Bech stepped out. He didn’t want to make serial pipes anymore, but wanted to make individual specimens – something that he has really successfully mastered.

Different opinions between Nielsen and Henrik Jørgensen then made Nielsen leave. He became independent and a few years later he opened and ran a pipe shop in the harbour of Svendborg for several years. It wasn’t an easy task: In those days Svendborg had 5 pipe maker shops and was the pipe maker city in Denmark.

A little more than 16 years ago Nielsen moved to Gammelnyby (Old New Town) on the outskirts of the idyllic seaport. Next to the small picturesque cottages he has his workshop and behind it a beautiful garden with old fruit trees and an even older sail boat.

The Dane used to make big pipes. Today they are more medium-sized but first of all: They are compact, sturdy and tough. This is Nielsen’s style. He calls them masculine and believes that pipes make men. “Pipe-smoking men inspire confidence and security”, stresses Nielsen. To prove it he quotes a famous English judge who never met an arbitrator who smoked a pipe.

Nielsen became famous for his brilliantly well-proportioned Bulldogs. Nielsen says enthusiastically: “They are the most beautiful - and next to the classical pipes, they are also the most difficult ones to model”. "Classicism is returning", predicts the Dane who has added his elegant touch to classical pipes. He does love the compact shapes as much as ever, but he turns more and more to the slimmer designs.

Nielsen’s unique, hand made pipes have hand made stems of black para rubber, artificial amber or Cumberland. The bands are nearly always made of silver, and they form a perfect connection between stem and shank.

Nielsen’s trademark is a serrated arrow. If you are a sailor or just fascinated by the sea, you will look at Nielsen’s pipes and realize that the two belong together. Nielsen’s compact designs fit perfectly with sailors, fishermen, rowers and other water dogs.

And here is a bit more for the fascination of sailors: Nielsen’s boat was built in 1920 on Funen. Originally it was a fishing boat and with its teak deck and mahogany cabin it is a real treasure. The boat has heavy blocks and ropes and old brass-mountings, and together with a wonderful old compass it is the perfect setting for Nielsen’s pipes.