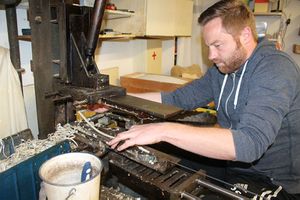 The clay pipe workshop of Jens Steuler is one of the last remnants of the almost forgotten craft of "Pfeifenbäckerei" (literally "pipe baking"). It is located in Hilgert in the Westerwald region[1], where the entire village has been shaped by this craft for the past 300 years and high-quality smoking pipes were made from clay. While almost the entire place used to live from this craft, only this workshop has remained since the end of the last century. Clay processing has a long tradition and history in Hilgert. It is assumed that clay processing began here in the early 15th century. In the middle of the 18th century, the prodiction of jugs was replaced by the production of clay pipes, which shaped the whole village in the following years. Clay pipes still adorn the coats of arms of the local community and the local sports club.

In the 20th century, however, the workshops gradually disappeared from the village. The last full-time pipe bakers in the 1980s were Lothar Hein and Steuler's great-grandfather Wilhelm Albrecht Simonis, who stopped production at that time. Simonis' workshop had been continued by Rainer Steuler, Jens' father, who produced pipes using the traditional method until 2018. After his death it is now Jens who continues the tradition with his friend Davide and makes the same pipes in the same way as his ancestors once did.[2]

The craft of "Pfeifenbäckerei" came to Germany at the beginning of the 17th century with the advent of tobacco consumption via England and the Netherlands. A special so-called pipe clay is used as the material, which was white in color after firing. Although clay pipes were increasingly displaced with the introduction of briar, the Westerwald clay pipes are still smoked at a number of traditional commercial and civil events in northern Germany, e.g. at the Schaffermahlzeit in Bremen[3], here now as a sign of distinction.[4]