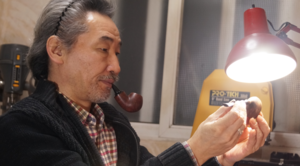 Kim Jong Wook was born in Seoul, South Korea on 1961 and now resides in Namyangju-si, Gyeonggi-do. Kims major was fine arts back in university and before making pipes Kim worked as a painter. Kim began smoking a tobacco pipes in 1983. He started making tobacco pipes in 2010, when the tobacco pipe club was opened online in Korea. Kim first began to repair and customize club members’ tobacco pipes with the knowledge that he had learned from YouTube, Pipedia, and forum websites for tobacco pipes. Within 3 years Kim made about 200 tobacco pipes, and gained popularity from the club’s members. As a result, he was confident to change his profession from painter to tobacco pipe maker in 2013. Nowadays, Kim makes about 60 to 70 tobacco pipes a year. The tobacco pipe makers who inspire Kim are Hiroyuki Tokutomi, Bo Nordh, Lars Ivarsson, Tom Eltang and Alex Florov. Kim makes tobacco pipes that shows a lot of bird eye and reinterpret classic shapes to modern shapes.