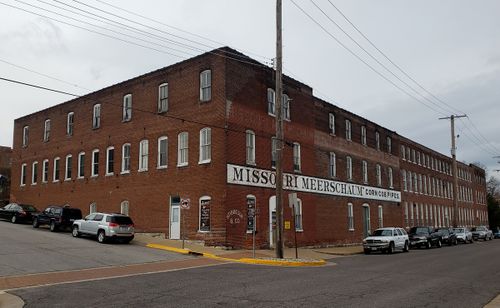 The factory as it stands today (March 2019), when visited by Scott Thile, Pipedia founder, and avid smoker of cobs

The following photos and narrative are from a factory tour in March of 2019. The wonderful old building is just across the road from the Missouri River, which can be seen out windows that originally supplied the light to work by. The corner section is the original building, which was added onto in various stages, both upstairs and upriver, to keep up with the growing demand for corn cob pipes in the early to mid 20th century. The founder, Henry Tibbe made pipes using a foot powered treadle lathe and other hand tools in a much smaller workshop, and resisted the notion of scaling up as the demand for his pipes increased. He founded the company in 1869, which is this year (2019) celebrating its 150th anniversary!

Henry's son, Antone Tibbe is responsible for the building and additions, and was the primary force in the scaling up of the company. Most of the third floor, once humming with activity is now used for housing an inventory of cobs (aged at least 2 years before being crafted into pipes). There is also ample storage for retired machines, which are often gleaned for parts to maintain the machines that are still in production. The second floor has more cob storage, as well as office space, and a wonderful museum and gift shop. The making of pipes, packaging, and the shipping and receiving area are on the first floor. There is an old freight elevator facilitating the production by transferring cobs and various parts and supplies between floors. It is driven by the original belt and cable system which was first powered by steam, and later converted to electricity. It is still carefully controlled using the same antiquated pulley system with a false move causing the unspooling of a large cable. Thankfully that is rare!

Many thanks to Missouri Meerschaum Company for their Underwriting support

Most of the older machines still in production were designed and built by a nearby machine shop, still owned and operated by the same family today--they still provide maintenance and repairs. Some of these machines date back to when the factory was powered by steam and Anton needed powered machines to meet the growing demand. Antone later brought electric power to Washington to replace the steam in order to keep the machinery churning out cobs. There is an old Tibbe Power Company building standing just up from the factory on the same street.

At the time of my visit the company had approximately 35 employees, 5 were in the office, 2 work full time with growing, harvesting, and shelling the corn cobs across the Missouri river from the factory (I hope to visit that part of the operation at some point), and the other 28 or so employees were working on various stages of making the pipes.

Several of the pipe makers pictured in the photos have worked for Missouri Meerschaum for thirty years, others are younger, and learning the ropes. The workers I spoke with took a great deal of pride in their work and being part of an American tradition that is enjoyed Worldwide.

One of the great appeals of the Missouri Meerschaum Company is the 150 year tradition of growing and making corn cob pipes, another is the vertical integration. The "pipe corn" grown by the company is a high bred of 4 varieties designed to yield larger thicker cobs, and originally developed in the 1960s. The grain is also used, though not by Missouri Meerschaum. Some of it is made into whiskey by Pinckney Bend Distillery. I really need to try that paired with smoking one of my cobs! Some of the cobs that are too small for being fashioned into pipes are now being made into duck calls by a local Washington woodworker.