Viggo is surely one of the seminal figures in the evolution of the Danish pipe. His pipes are all handmade - also handmade stems, often in Cumberland.

Most of the pipes are quite big, and a large number are made for 9mm filter. The finish is just perfect and when holding one of Viggo's pipes, you can tell, he's a pro. 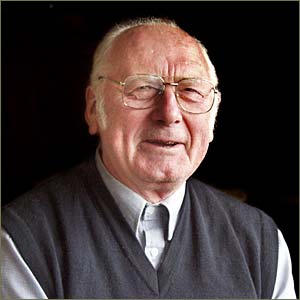 Viggo Nielsen was born in 1927. During World War II he started making pipes at a now closed factory. These pipes were made of birch due to the lack of briar (because of the war).

In 1948 Viggo started his own pipe factory, "Bari". But it wasn't until 3 years later he could actually acquire Briar wood for his pipes. The business was very successful producing both classic shapes and freehand models.

In 2001 Viggo celebrated his 50 years anniversary with pipes in briar, and there might be a few very special anniversary pipes from that year....

In 1978 Viggo sold the business to a German tobacco manufacturer and he began making the Faaborg Pipe together with his two sons Jørgen Nielsen and Kai Nielsen. Even when Viggo had reached the age of retirement, he could not quite leave his workshop and he still made about 100 pipes a year, some of them based on the famous "Fåborg Pibe" but also a few "Jewels of Denmark", until he passed away.

The name "Jewel of Denmark" is reserved for the very few 100% perfect blocks with no stains and with straight grain and birds eye, and is still used by his son Kai, who continues making pipes in the workshop they shared.

The Faaborg Pibe is sculptured by hand, from the best materials. Each lump of briar is carefully selected and seasoned before shaping begins. By following the structure and the fine grains of the briar root the pipes are formed to become the pride of any particular pipe owner. You can choose a sandblast or smooth surface.