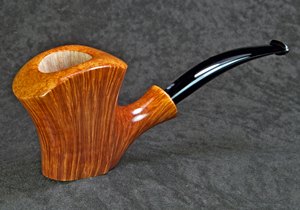 Quinton Wells is likely best known in pipedom for his active role with the Greater Kansas City Pipe Club (GKCPC), and his work with the American Carvers Pipe Making Competition, but he is also an accomplished pipe maker himself. While mostly self-taught, Quinton has had guidance from a number of notable pipe makers, including Lee von Erck, Michael Lindner, and Tonni Nielsen, as well as pipe restoration specialist, George Dibos. Quinton does not make many pipes per year, but when he makes pipes he pursues it with a passion and dedication that yield excellent results.

While under Quinton's leadership, the GKCPC started focusing on supporting, encouraging, and promoting American pipe makers. Since 2009 a big part of that effort has been the American Carvers Pipe Making Competition. Each year a theme is selected by the GKCPC and submissions solicited from American pipe makers. Three judges select seven pipes from those submitted to be included as part of the special 7 day set in a beautifully made case, which is then raffled off. The proceeds go to the carvers whose pipes were selected. The winning set, and so far the other pipes submitted, is then featured in an article appearing in Pipes and Tobaccos Magazine. Quinton's beautiful pipe was selected to be included in the 7 day set in 2011, when the theme was paneled pipes.