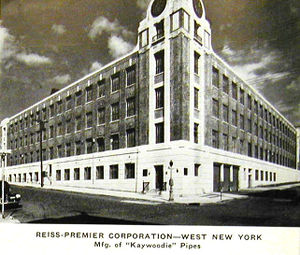 The Reiss-Premier Corporation was founded on June 22, 1940 in New York as the successor to the Reiss-Premier Pipe Company of Chicago. That company was in turn founded in Chicago, Illinois in 1922 by Jacob D. Burger, again as a successor company to two former pipemaking concerns, Reiss Brothers of Chicago and Premier Briar Pipe Company. The company was located in the south half of the fifth floor at 32 to 40 South Clinton Street in Chicago. Four years later, in 1926 Reiss-Premier Pipe Co. was issued a trademark for the term "Drinkless", made famous on so many Kaywoodie pipes, and for which they used the slogan "You can't get a drink from a drinkless pipe". 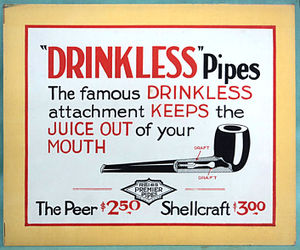 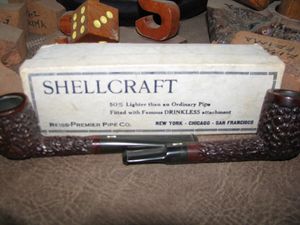 In August of 1926, Reiss-Premier Pipe Co. purchased Kaufmann Bros. & Bondy and a year later the Kaywoodie pipes began to sport the Drinkless stinger. By 1928 Reiss-Premier had moved their production to Union City, New Jersey, and in December of that year were granted a patent for a cigarette and cigar holder. The following month the company moved again, purchasing the factory building of Paul G. Mehlin & Sons, piano manufacturers and taking over a part of that four story building.

After Reiss-Premier Pipe Co. became Reiss-Premier Corporation they continued to innovate, and in 1947 trademarked the "Synchro Stem" system used on decades of Kaywoodie pipes.

The Reiss-Premier Corporation was purchased in March of 1955 by S.M. Frank but remains an active corporation in the state of New York.