Originally Published in Pipes & Tobaccos magazine 2016, and used by permission by the author. This version is unedited. 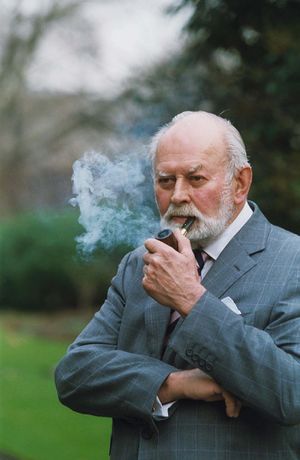 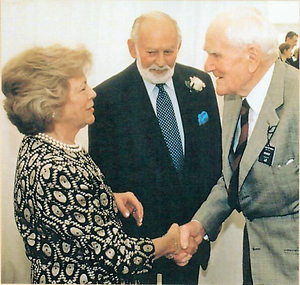 Richard Dunhill, grandson of the founder of Alfred Dunhill Ltd., died on August 26, 2016, at the age of 89, having been an employee for 68 years. He joined the company in 1948, was Director for 28 years and Chairman for 27 years, overseeing this vertically integrated global colossus, a premium purveyor of “smokers’ requisites” and luxury goods in operation for more than a century: its products are available in 21 countries, in more than 100 retail boutiques, 70 of which are Alfred Dunhill stores. So internationally recognized is the brand that between 1924 and 2005 seven books have been published about its history and its eclectic products.

The following information is in the public domain. Richard was a past master of the Worshipful Company of Tobacco Pipe Makers and Tobacco Blenders, an honorary member of the International Academy of the Pipe, and the British Pipesmokers’ Council “Pipe Smoker of the Year” in 2002. He was a philanthropist, endowing the Alfred Dunhill Links Foundation, a charity that raises funds for worthy causes, including prostate cancer research. He was an innovator, inspiring different companion and Seven-Day, special-event, and one-of-a-kind briars, such as the $3.5M Eiffel Tower pipe, bordered in gold, diamonds, sapphires, and rubies. He conceived The Fellowship of White Spot, a free newsletter about the history and heritage of the Dunhill pipe.

But I got to know Richard as a man, not as an industry magnate. My association with the Dunhills began in the late 1960s while in Argentina. I had received an unexpected gift, an autographed copy of the first reprint of The Pipe Book: “To Major Benjamin Rapaport, with sincere regards, Alfred [H.] Dunhill.” While in London in 1982, I sought an audience with Richard to return the favor with a copy of my book, A Complete Guide to Collecting Antique Pipes and, selfishly, to learn more about the vast private collection of antique pipes and tobacco books I had read about. (Ten years later, Richard reciprocated with a copy of Alfred Dunhill, One Hundred Years and More.) The gesture of a gift, and the fact that his wife was Argentine, and I had met my wife in Buenos Aires, broke the ice. He was engaging, self-effacing, and effusive in our informal chat. I still remember his view on smoking: “Tobacco is like salt. Too much will kill you, none at all is bad for you, and the right amount is beneficial.” I learned that his passions were gardening and backgammon, and that he had a deep affection for the history of the pipe in all its forms, what his grandfather had begun in the 1920s: assembling an exceptional collection of antique smoking utensils and an impressive library of early tracts, treatises, and chap books on tobacco. He often attended London auctions to snag the occasional antique pipe to add to the collection.

In January 2000, at Richard’s request, I visited again to conduct a valuation of the tobacco library. When I asked why, he said that the books and pipes were eventually to be deaccessioned, a decision, I believe, of the holding company, Compagnie Financière Richemont S.A. This announcement was a slight to Richard who had a personal—and a family—stake in the care and feeding of both collections, to be saved, not salvaged. On May 12, 2004, Christie’s, South Kensington, conducted the auction that dispersed everything excluding company archives.

The third time we met was at the International Academy of the Pipe convention in Windsor, England, in 2001. He seemed a different person, somber, detached, and distracted from the proceedings. Fifteen years have passed since that last encounter as I learned of his death in early September 2016. Through the years we had become occasional pen pals, and I considered myself fortunate to be among his many American associates. After all, I was not an authorized “White Spot” retailer … I was not even affiliated with the tobacco trade.

My personal opinion is that whoever assumes the mantle at Dunhill will have to be more than someone wearing a Saville Row suit and John Lobb brogans. He’ll have to embody Richard’s attributes, characteristics, and personality. Richard Dunhill was too well respected to be forgotten!