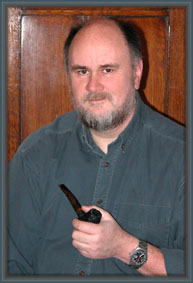 Born some time in the 50's, started smoking pipes in the 70's, in the year 2000 I began collecting and refurbishing pipes for my Collection. At this time I met Jan Harry who taught me pipemaking, that was the beginning of a new passion....

All pipes are made of well seasoned, best quality plateau briar "extra extra dry". They are free of any fills!

From Falcons to fame? 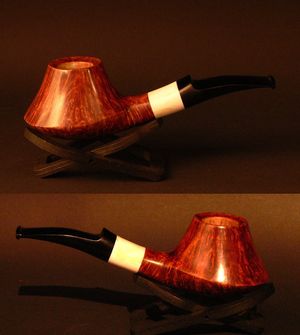 German newcomer Roland Schwarz seems an unlikely aspirant to carving excellence. For almost 30 years, the media designer gave scarcely a thought to the pipes he smoked - preferring Falcons for convenience. Then, someone gave him a collection of estate briars, and obviously touched a hidden nerve. Roland developed an unexpected passion for rejuvenating estates, which eventually evolved into creative ambition.

Roland Schwarz in his workshop: Some four years after restoring his first estate, Schwarz has staged a very promising commercial debut as a pipe maker, with collectors on both sides of the Atlantic singing his praises. 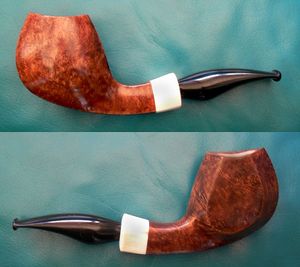 Jan Harry gave the newcomer a kick-start, serving practical advice in generous portions. Roland carved his very first piece under Jan's tutelage, and in the beginning, Seiffert inspected just about every pipe Schwarz made. "Without Jan's help, I might have capitulated," Roland recalls. 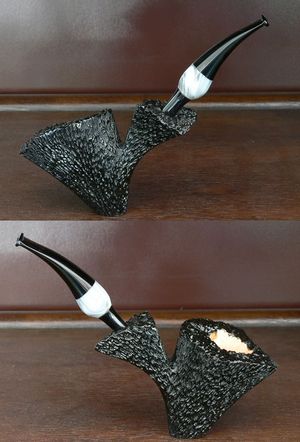 Erwin's role has been that of a market-savvy pilot. Among other things, he helped Roland determine the right time to go public via the Web - using his own reputation as a connoisseur to ensure transatlantic attention. Initial acclaim has been highly encouraging, with several established American and European experts ordering briars within two days of the new website's launch. All the same, both Erwin and Roland himself acknowledge that the pipes have some way to go before they can compete with the diamonds of the briar world. "The engineering is there and the bit work is excellent," says Erwin, "but Roland is still developing an aesthetic style of his own."

Meanwhile, and perhaps conveniently in these days of dollar depression, Roland represents a curiously rare breed - the competitively priced German mid-grader. In the following brief interview with Pfeifenbox, he says this is a niche he will continue to occupy, despite his high-grade aspirations. Secretly, one wonders. Given this maker's dedication and perfectionism, it's hard to see him making any voluntary compromises for business purposes - his tier, one suspects, will be decided by his talent alone. 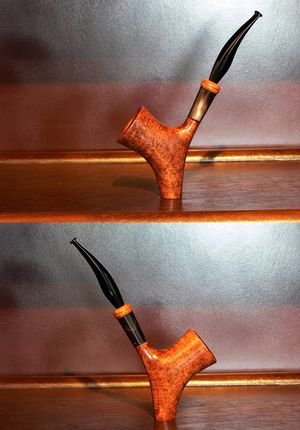 Few German newcomers have experienced a smoother, transatlantic market entry than you. Is there any danger of this going to your head?

RS: No, most certainly not. I'm very realistic and able to judge my own work. There's still plenty to learn. Technically, my pipes are getting there, and I'm satisfied. But in future, I'll be focusing on design - developing shapes, the aesthetic side. This will take time.

Which niche are you aiming for? Professional carving? High grades?

RS: Yes, I'd like to go full time. I aim to continue making mid-grade pipes, while also carving some higher grades in future.

Which aspects are you currently concentrating on most?

RS: As I said, the design aspect is going to play a special role in future. However, I want to make smoking gadgets, rather than sculptural pieces.

Currently, your pipes are only available directly from your site. Don't you think you will need vendors in the long term?

RS: Sooner or later, I think my pipes should also be available from dealers. I'd like to concentrate on carving, not so much on distribution.

Are your current low prices here to stay, or are these introductory price tags? 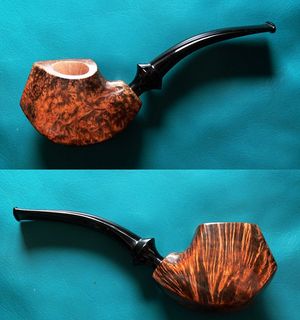 RS: My prices should be viewed as introductory, but they'll stay moderate in future, too. However, since I need at least a day to make a pipe, the retail price will definitely be more than 60 euros, even for a rusticated piece. Apart from that, prices - like those of other carvers - will be based on the quality of the wood.

Which investments must a newcomer make to get into the business?

RS: Initial costs will be something like 2500 to 3000 euros. Of course, you could get by with files, sandpaper and a drill - but that's not my style. Mind you, the main investments are the time, patience and stamina required - especially, when you've just ruined yet another 40 euro block!

Read A Review by Nick Johnson