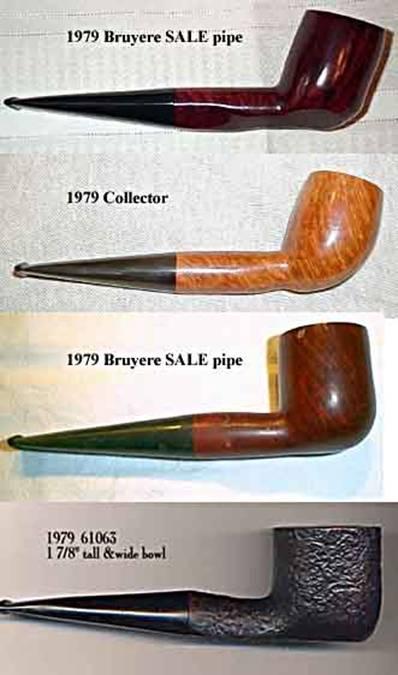 I have written elsewhere how Dunhill obviously made a concerted decade effort beginning in the mid 1970s to finish up what must have been an awesome inventory of rough cut but unfinished bowls and how this led to the unfortunate episode of the 1979 “Sale” pipes. These ‘sale’ pipes consisted for the most part of awkwardly shaped Group 6 bowls and shanks finished as Bruyereswith atrocious bit work. They were stamped simply “DUNHILL / LONDON” “(6)” (and sometimes an “X”) and sold off for $50 per. But as a perusal of pipes offered over several months on eBay indicates, there was a selection process and not all of that 1979 inventory box of unfinished bowls resulted in “Sale” pipes.

Indeed the bottommost pipe with modest changes, principally a quarter bend and a change of finish, became the Xmas pipe of a few years hence.

No doubt there’s an interesting tale and reasoned explanation about how and why these bowls came to be separated into $50 ‘dogs’ and hundreds of dollars ‘firsts’.

Back to Loring's articles here