The remark in the beginning was said by a Swedish pipe-maker from Malmö, Björn Bengtsson, and he said it at a meeting arranged by the Pipe Club of Sweden last year. To prove his statement, Björn showed us a pipe in a classical shape made by his teacher Poul Rasmussen, and we can assure you - that was a beauty.

But this story is about Björn Bengtsson, so let us start from the very beginning.

THE FIRST TRIP TO DENMARK 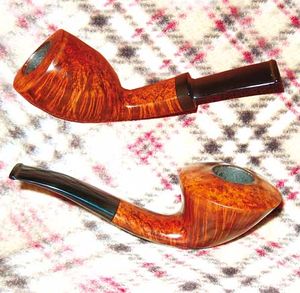 Mrs. Bengtsson, Björn´s mother, was the owner of a tobacconist´s shop in Malmö. One thing that troubled Mrs. Bengtsson a lot was all the pipes handed to her to be repaired. No one in Malmö could do the job, so she had to send the pipes to the different makers, which took a lot of time and was costly. But she had a son, Björn, who just had finished school. Could he learn to do the job? Björn was interested but his mother understood that to learn it properly, he needed to be trained by a skilful pipe-maker. She asked Sixten Ivarsson in Copenhagen, but at this time he had no possibility to take another trainee, so the answer was no. The same question was put to Poul Rasmussen and with him Mrs. Bengtsson was more successful. But she had to pay 500 SEK for it. This was in 1964 and in those days 500 SEK was not a sum of money to be ignored. However, Mrs. Bengtsson considered it a good investment for the future and accepted. The receipt for those money has been saved by Björn (he has even framed it and put it on the wall in his home) and it with pride he shows it to us.

So this young boy, only 16 years old, went to Copenhagen to learn how to repair pipes. He stayed there for a year and a half, then he thought he had learned what he needed and went home to help his mother. But he did not stay long at home.

THE SECOND TRIP TO DENMARK 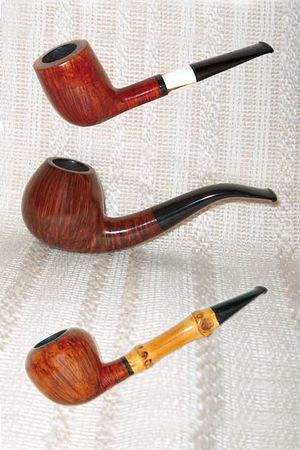 In October 1967 Poul Rasmussen died and his widow, Anne Julie, was left alone with a tobacconist´s shop and a fully equipped workshop for pipe-making. She was able to take care of the shop, but what to do with the workshop? She decided to ask some of the pipe-makers that had been trained by her husband to start working for her. One of them was Björn Bengtsson. So Björn went back to Denmark and started making pipes together with Teddy Knudsen and Anne Julie´s brother. The three young men got along very well and Björn looks back at those years as a very happy period of his life. He stayed there until 1974 when he once again went back home to Sweden, this time together with a Danish girl who had become his wife.

A little remark may be in its place here. Did someone find the name Anne Julie familiar? Yes, that is the female pipe-maker Anne Julie. But at the time when her husband died she had not started making pipes and probably she had no time for it, alone with small children as she was. Today Anne Julie´s pipes are sold all over the world at high prices.

BJÖRN OF SWEDEN ON HIS OWN

Back in Sweden, Björn started as an independent pipe-maker and his pipes soon got a good reputation. Most pipes were sold in Germany and Japan but they were also to be found in Denmark and here in Sweden. The production was about 100 pipes a year.

In the beginning of the nineties there was a decrease in demand for pipes, a fact that most pipe-makers had to realise. Björn did not believe in the possibilities to make a living as a pipe-maker in the future, so he decided to take another job and work part-time making pipes. He has continued so until today and all pipes made during this period have been sold in Germany. But at our meeting he tells us that the demand is increasing especially from Japan, so he is taking into consideration to start full-time as a pipe-maker again.

PIPES IN A PERSONAL DESIGN 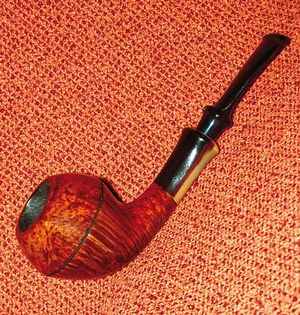 Björn does not make any sandblasted pipes but when necessary he rusticates some of them, but as few as possible. We understand that he does not like to rusticate – if it is the job to do it or the result he does not say. But probably it is the job, because he had one rusticated pipe with him to show us, and it was a real beauty.

All Björn´s pipes are coloured the same way in a deep brown colour. The pipes are stamped “BY BJÖRN SWEDEN” and with 3 or 4 digits telling the month and year of production. So a pipe stamped “1086” was made in October 1986.

All of us who are very fond of Björn´s pipes are of course hoping that he will start making pipes full-time again and that there will be at least some of his excellent pipes left for the Swedish market.