Svend Hangaard was born in 1944 in Jutland, and became a pipe maker later in life, after retiring from his work as a prison warden, but there is an interesting twist. He first played with making pipes while working in the prison, and even worked pipe making into a project for the inmates. He wanted to give them something productive to do that would also provide them both a useful end product and minimal opportunity to harm themselves or each other. He provided them with pre-drilled stummels (via Henrik Jorgensen, Poul Ilsted, and Tao, then all at the Svendborg pipe factory) and set his wards to shaping briar. 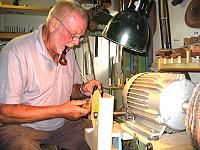 Svend had also been a cabinetmaker, so he was familiar with wood and tools, and handwork was already something of a passion. Being a skilled craftsman and a pipe smoker, it is not surprising that Svend became interested in making pipes. He made his first pipe in 1987. It was just for fun, but he wanted to learn more. He already had a lathe, and arranged to visit Poul Ilsted to see how a pipe was made professionally. But with a full time job, it was hard to find the time for pipe making.

In 1994 Svend moved to Faaborg, witch happened to be the home of several excellent pipe makers. Upon retiring in 2007, he contacted Kai Nielsen, who was willing to help, and he then met Joao Reis and Karsten Tarp. All of them encouraged him and gave him the help he needed to develop his skills. They also encouraged him to join them at the Chicago pipe show. It was a great experience and his pipes were very well received--all of them were sold. His pipes now sell well in the US, and there is growing interest for them in China.

Svend mainly uses briar from Corsica or Italy. The pipes are either smooth or sandblasted and most stems are made from Ebonite, or sometimes Cumberland. The pipes are stamped with Svend's second name though he has no grading system. The production is small, about 50 pipes a year.

Information for this article is from the excellent book, Scandanavian Pipemakers, by Jan Andersson, and Smokingpipes.com