Swinks pipes have been around since the mid 1950's. Wilbur Swinks, from Franklin, Ohio was employed by a local newspaper. In 1955 (est), he started making pipes as a hobby. His pipes have one word on the left shank, "SwinkS". Swinks are high quality and exceptional smokers. Chester Blair bought his business in 1983. Chester was his apprentice. Wilbur Swinks died in 1987 at age 80. Mr. Blair and a helper made pipes for a short period then sold all of the equipment. Swinks pipes are known by very few people in the world, but in the Dayton, Cincinnati, and Colombus, Ohio area, Swinks pipes are spoken of in a somber, serious way.

The 'Swinks Doodler Aircooled' pipes, are identical to the Porsche Design pipes, with cooling fins around the bowl, but were first manufactured in the 1950`s! 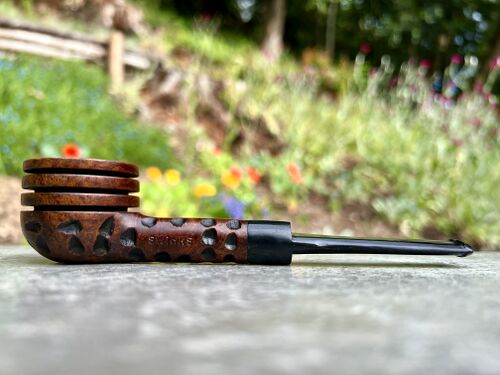