In mid-1941, during the infamous Luftwaffe Blitz bombing of London, the Alfred Dunhill store (and many others in the surrounding area) were bombed and almost totally destroyed. The restoration was not fully completed until 1953. A popular piece of lore from that period is that Dunhill employees called Sir. Winston Churchill at 4:00 a.m. to ensure him that his private collection of cigars housed in the store's humidifier had been transferred safely out of danger. As seen in the image to the right, Henry Dunhill continued to sell pipes among the rubble and ruins of his shop. An example of his remarkable resiliency.
Alfred Henry Dunhill was appointed as president in 1928 by his father, a position he held until 1961. He then decided to leave the company and transferred his presidency to his sister, Mary Dunhill. Alfred Henry Dunhill passed away ten years later (in 1971) at age 75.

In another rare image (left), courtesy of our friend Jonathan Guss, we have a clipping of a magazine that says:

Mr. Alfred H. Dunhill holding a fragment from the wreckage of the shop in Duke Street, St. Jame's in London, that was founded by his father. Tobacco in February told the romantic story of the shop which "a spacious, and gracious, place of bright, light woods and beveled glass" was ruined by Hitler's airmen in a night raid.

The Second World War was a difficult time. Rationing due to the war was so drastic that Dunhill suffered from the scarcity of raw material until the beginning of the 1950s, several years into the post-war period.
Dunhill published catalogs annually, even during the First World War with each catalog being more elegant than the last. There were no catalogs between 1940 and 1950. however, with the exception of two. These were catalogs of "gifts", distributed in North America circa 1943, and in Great Britain at the end of the 1940s.

According to John Loring, few pipes (and mostly uninteresting) were produced by Dunhill during the 1940s. Italian Briar for smooth pipes was extremely scarce, and Algerian Briar (used in sandblasts) was just slightly more available. Likewise, vulcanite for stems was either rationed or forbidden, so that many, if not most of the pipes produced during the war were equipped with horn stems (horn is a very comfortable material, but is easily cracked).

Loring also states that pipes from this period found on the estate market with vulcanite stems likely had the stems replaced at some point. It would not be surprising if Dunhill routinely replaced the horn stems with vulcanite at little or no cost after the war years.

Loring defends a hypothesis in his article called A Hypothetical WWII Pipe, in which he considers that during this period the following nomenclature was used:

No date code or any other nomeclature, like the inner tube, for example. According to the available historiography, the 1341418/20 patent begins to appear in 1920, almost always followed by another patent, as an example: PATENT MARCH.9.15 1341418/20. In rare cases it appeared alone. We recently had access to a pipe bought from that period (unsmoked!), perfectly aligned with Loring's hypothesis. Take special attention to the flyer that states: Arrived Safely - Thanks to Sea Power and that reminds us of the war. 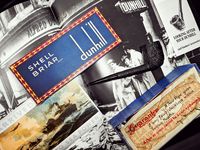 Until approximately mid-1934 the nomenclature was done in the possessive, i.e. "Dunhill's Shell". After this period the possessive was dropped, becoming "Dunhill Shell". Thus, as the pieces in question are already from the time of non-possessive nomenclature, we can assume that they are post 1936. The only pieces found with this patent date are from the 1930s (1933 specifically), and return in the beginning of the 1940s (up to 1945, perhaps), when it was replaced by 417574/34. Some pieces have the same patent in the beginning of the 1940s (1941/42), however, with the suffix "U.S.", namely: U.S. PATENT 1341418/20, being destined for the North American market.

Here we have an atypical example of Bruyere (A, Shape T36. Patent Nº 417574. 1940) from this period. Remember that Italian Briar for smooth pipes was extremely scarce during the 40s.

Because a lack of material and paint in the war days, some Dunhill's from that Era look a little strange color wise. Also they could not get enough top quality briar and must do with was available. They used the whole root in war days instead of picking the just best part. Fred Wekx. 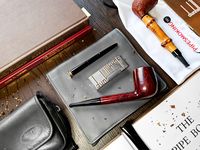 In this particular case, it looks like the block was from the center of the burl. Maybe this pipe should have been sandblasted instead of being left smooth, but it was a difficult time, and perhaps this was the only way to produce a few good pipes.

"Few, and for the most part uninteresting, Dunhill pipes were produced during the 1940s. It would appear that during World War II and for a good bit afterward the Italian briar necessary for Dunhill smooth finished pipes was in extremely short supply while the situation for Algerian briar necessary for the Shell finish was only somewhat better.


For Dunhill, like all English companies, the period from 1939 through 1953 was particularly difficult. During World War II itself, Dunhill production suffered from severe shortages of briar, vulcanite, and tooling and least we forget, an overabundance of aerial bombings. And for several years after, while the details changes, the difficulties did not. Until the 1950s Dunhill pipe production appears to have been lower than when it was a fledgling company in World War I and after thirty consecutive years of annual pipe catalogs there wasn’t even one such for the entirety of the 1940s.


Following war’s end the supply of vulcanite and tooling freed up, but briar was not so readily available. Italian briar which Dunhill used for its smooth finished pipes didn’t become available in blocks suitable for larger pipes until 1948 and then initially only at very high prices. The supply of Algerian briar became available sooner but Dunhill used that briar only for its Shell finish pipes. Equally, if not, more importantly, there was a dramatic change in Dunhill’s customer base, in short for all practical purposes only Americans could afford to buy Dunhill pipes in any volume. Thus targeting the American market was of utmost importance. And in that latter regard, there was a particularly irksome development amongst the competition." J. Loring

Here we have another curious example, but this time, a Shell. It is a wartime pipe with a rather interesting stem/tenon configuration. Don Giles (owner of the pipe) believe it is a modified Vernon tenon.

That is an interesting part about this pipe. I believe this was just after the bombing and parts were scarce. I feel very lucky to have this piece as I am sure there is a story to the odd construction. I certainly cannot prove any of this, but it certainly is interesting. Don Giles.