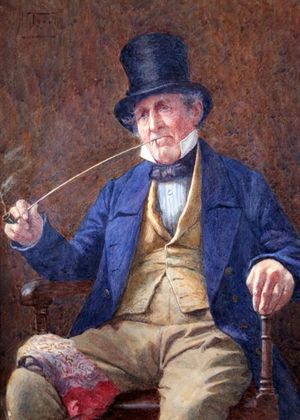 Painting of an old chap/historical figure smoking a Churchwarden

I recently bought a couple of new Peterson Churchwarden pipes. The main reason being, that I did not have any representation of them in my Peterson collection of pipes. It was never a series of pipes that held any attraction to me, as I perceived that they were very fragile and totally impractical. However as with most prejudices my fears were to be proven without foundation.

The Churchwarden style of pipe are one of the earliest pipe shapes and still remain very popular. The overall length of the mouthpiece is said to ensure a pleasant cool smoke, which is particularly suitable for an evenings relaxation. It really should fall into the same category as the Peterson "House Pipes" which are basically for confinement to house use.

In Elizabethan times the pipes were made from clay and were graceful with thin bowls and long stems. The Dutch redesigned these clay pipes by enlarging the bowl and lengthening the stem and came to be known as the Alderman and was officially introduced by William II around 1700. The Alderman was adopted by the English and was graced with a curve to the stem and called "Yard of Clay" or "Churchwarden" as it's better known as today. The purpose of the long stem was to allow the smoker to rest his hand and bowl on the arm of the chair, the small knob on the bottom of the bowl was to stop the hot clay bowl from burning the chair arm, the knob reputedly for he benefit of the pipe maker, became more of an aesthetic part of the shorter pipes rather than a requirement in later times. This same style can be seen in many of Petersons early Patent pipes.

Churchwardens were in vogue with the upper-classes of the Elizabethan times, the more common man would smoke a short pipe, often made shorter by snapping the end of the stem off due mainly to the "shared house pipes" in the Taverns and ale houses, these pipes were there for the enjoyment of the customers and by snapping the end off separated themselves from the previous smoker. Churchwarden pipes essentially have a long stem which gives an extra-cool smoke, producing a cooler smoke due to the distance smoke must travel from the bowl to the mouthpiece. They have the added benefit of keeping the users face further away from the heat and smoke produced by combustion in the bowl. Clay pipes and tobacco were often provided after dinners at taverns or at Club meetings and would be used for one evening only.

Clay pipes could quite easily break so the shorter pipe was more appropriate for the workplace.

Back in the 1700 and 1800s, when pipe smoking was allowed in churches, is where this style of pipe began its life. Designed to rest on the back of church pews, the modern-day briar versions capture a piece of that history.

Churchwardens pipes were reputedly named after the Churchwardens who used to put their pipes long stem out of the church windows so they could smoke in church.

It was the mid 1800's before the Churchwarden pipe was transformed from clay with the introduction of the wood briar.

The Ebony D6 which I have just acquired, is one of the sweetest smoking pipes I have ever enjoyed right out of the box. The pipe is dry as a nut. The wood has obviously been well cured and cared for.

So whether you are interested in churchwarden pipes because you just like the way they look or your have seen them in movies such as 'Sherlock Holmes' or 'Lord of the Rings', they make a very cool display piece or an everyday smoker.