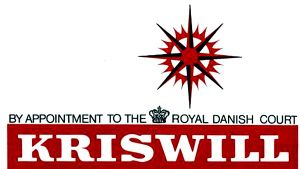 Founded in the late 1950s, Kriswill was one of two large pipe manufacturers in Denmark during the 1960s and 1970s, on par with Stanwell as measured by number of employees, pipes produced, and quality. The Kriswill catalog cover reads “By Appointment to the Royal Danish Court, KRISWILL, Kriswork Briar Trading, Briar Pipes Hand Made in Denmark.” 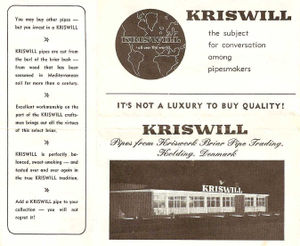 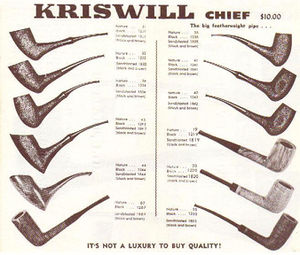 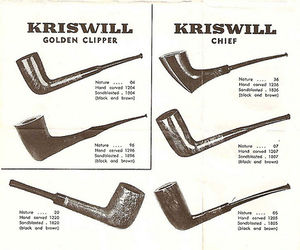 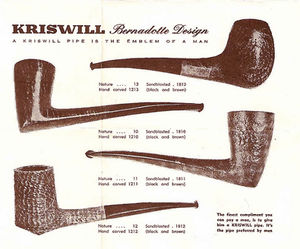 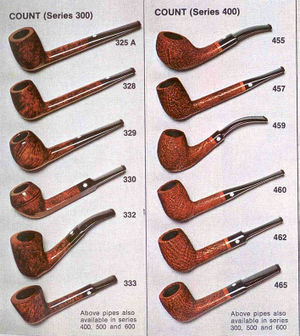 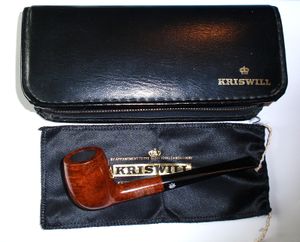 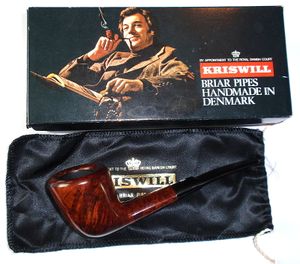 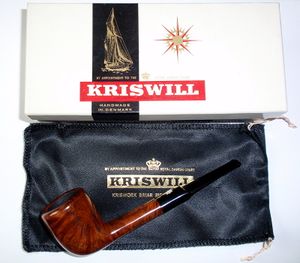 Kriswill began immediately after World War II. Karl Robert Kris, an engineer for the shipping company AP Møller at the time, was in port (undoubtedly in the Mediterranean) when he encountered a shipment of briar. The briar blocks awakened his curiosity and he took some home. About this time the the shipping trade become difficult due to the war, causing Kris to consider other business opportunities. In 1947, Kris (then 47 years old) established himself as a pipe maker in his hometown of Kolding.

Kriss started his pipe making operation in a house located at Haderslevvej 115 in Kolding, and was soon joined by 3-4 employees. The pipes were sold under the name Rocky and supplied the domestic market. Within 6 months the company had grown, more employees hired, and their sales expanded to markets abroad.

Due to increasing production and marketing, Karl Robert Kris decided in the mid-1950s to expand. An entirely new factory was built at Sdr. Ring road on the outskirts of Kolding. At that time the pipes were branded Kriswell. That name did not last long, however, as Stanwell believed that name was too close to theirs. The compromise was to change the name to Kriswill. Kriswill soon grew to become a serious competitor to Stanwell, especially in the export markets. The Kriswill factory logo, stamped on the stem, became the stylized compass rose - as a reference to the manufacturer's maritime background.

Kriswill pipes excelled in design and craftsmanship. Karl Robert Kris was not afraid of new designs and had a good eye on the US market, where larger and more innovative designs were increasingly popular. Craftsmanship was given top priority throughout Kriswill's production. A local designer / architect had designed the first models. Later, the famous architects Sigvard Bernadotte (Swedish prince and brother of Queen Ingrid) and Acton Bjørn designed their own series, which were known as Bernadotte designed.

Two other series were the Golden Clipper and the Chief. The Golden Clipper pipes were smaller, lighter, more reserved, and popular in Europe. The Chief series was especially designed for the Americans, who wanted larger pipes. These pipes were light for their size, however, very different from the "Danish Free Style" pipes that other Danish makers were sending to the US market. Kriswill pipes that did not meet the requirements of the main lines were sold as "seconds" under the names Danish Crown and Navigator.

Karl Robert Kris died in 1966. The factory was well-run, and Kris's widow wanted the family to continue the business. Karl's son, Jens was groomed as director and remained with the company until 1975. The 1970s were difficult times for pipe-making in Denmark, as in the rest of the world. In addition to declining demand, they struggled with runaway inflation and annual wage increases of 18-20 percent. It was challenging to maintain the level of craftsmanship without raising prices, yet customers had difficulty accepting large price increases. As a result manufacturing become less profitable. Soon Jens Kris left Kriswill and new management and staff were hired at the factory.

Shortly after Jens departed Kriswill the company failed. The Kriswill name and model series were sold to the Norwegian pipe factory Lillehammer. The machines were acquired by Erik Nørding, and the property was sold.

After a few years Lillehammer also ceased production. Kriswills were made for a while in the 1980s at the Catalan factory, Iberica de Pipas. But these pipes were far from the quality of the originals, and became Kriswills in name only.