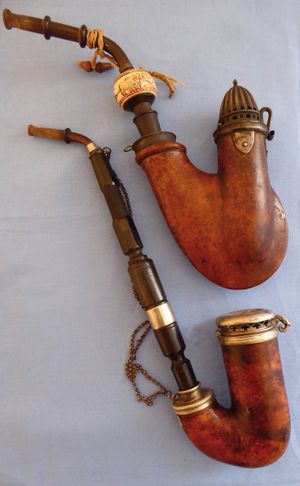 top: Ulmer Kloben, bottom: Ungarnkopf.
The bowls of the two pipes are made of curled wood. The stems and shanks are turned from wood. The lids and decorative fittings are made of brass. Courtesy Heimatmuseum Waldstetten
[CC BY-NC-SA]

The term Ulmer Maserholzpfeifen (Ulmer burl wood pipes)[1] covers the production of pipes from the root wood of different tree species (elm, ash, alder, birch, maple, etc.) in Ulm[2] as well as in the extensive area around the city. The oldest archival document from 1695 does not come from Ulm itself, but from Geislingen.

A distinction is made between two basic forms, the so-called "Ulmer Kloben"[3] (Wooden Block from Ulm) with a ridge that widens on the underside of the pipe head, and the Ungarnform (Hungarian Form) or Ungarnkopf (Hungarian Head) with a narrow, high pipe head that is always higher than the pipe neck. The pipe bowls were particularly enhanced by elaborate fittings, lids and chains made of silver. The extent of production is almost impossible to grasp, as the trade was not organized in a guild and was often only practiced as a sideline.[4]