Saint-Claude is a commune in the Jura department in the Bourgogne-Franche-Comté region in eastern France and was the world capital of wooden smoking pipes crafted by hand from the mid 19th century all the way to the mid 20th century.[1]

As early as the Middle Ages an established place of pilgrimage in Eastern France was the monastery of abbot Saint Claudius. In medieval iconography Saint Claudius was the patron saint of toymakers. The town that grew servicing the pilgrims was Saint-Claude. The pilgrims arrived from all over the Christian world, and the towns people made mementos for sale and lived off business from the pilgrims. The town also produced snuff and pipe stems made of boxwood, bone, horn and amber which they sold to Switzerland, Germany, and Austria. In time Saint-Claude became a thriving centre of wooden souvenirs, gem-setting, and luxuriously-carved pipe stems. According to local legend a Saint-Claude turner named David is credited with the making the first briar pipe. The souvenir industry of Saint-Claude supplied all the manufacturing preconditions for the making of the briar pipe. The firm of Jeantet as early as 1807 was making and selling German type porcelain pipes, Ulm-type wood pipes and meerschaums from local wood and horn. The contemporary technology determined the shape of the pipes, and they were typically composed of wood-turned parts. Local records indicate that in 1841 there were three pipe-making firms employing twenty workers. 1854 is the year ascribed to the beginning of pipes made from briar.[2]

After a first draft in December 1900 under the title “Union des fabricants de pipes de Saint-Claude”, the “Chambre syndicale des fabricants de Saint-Claude” (modified in “de la région de Saint-Claude” before 1925) was structure from 1907, in the wake of the very harsh strikes that occurred in 1906 in the piping industry. At the height of its activity, it brought together almost all the manufacturers of pipes and accessories (pipes, ferrules, fittings, etc.) from Sain-Claude and the nearby region and orchestrated their relations with the workers' union "Le Travail", public authorities and foreign markets, both customers and suppliers. After 1945, its activity was mainly carried out through organizations dedicated to issues of supply, export and advertising. It was put to sleep in 1966, the date of the creation of the Confrérie des Maîtres-Pipiers and finally dissolved it seems in 2007, its property being devolved to the Confraternity.[3] 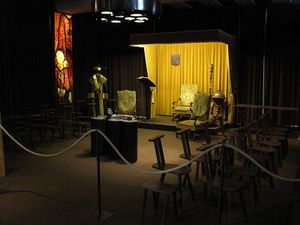 Chapter room of the Pipe and Diamond Museum of Saint-Claude

The Confrérie des Maîtres-Pipiers (brotherhood of the master pipe makers) is a registered association with the goal to be an “Ambassador of the important pipe industry of Saint-Claude in the Haut-Jura”. It was created in 1966 at the instigation of Edgar Faure who was then elected “Premier Fumeur de pipe de l'année” (First Pipe Smoker of the Year). Two meetings are held in the Chapter room of the Pipe and Diamond Museum of Saint-Claude each year. One of them elects the “Premier Fumeur de pipe de l'année” chosen by his peers for his passion for pipes. The chosen one receives as a distinction a pipe in his effigy made by the master pipe maker Paul Lanier (best worker in France 1991 for pipe sculpture). Among more than 1000 initiates you will find: Jean Richard, Jacques Faizant, Bernard Blier, Michel Drucker, Jean Poiret, Nino Ferrer, Jacques Audiard, Dominique Strauss-Kahn etc. The brotherhood was chaired until April 2018 by Michel Waille.[4]

Pipe likely made by Butz-Choquin with JP on stem.

The pipe illustrated here is one of those early briar pipes made from wood turnings with the same construction as the contemporary pipe stems. It appears that this pipe was marketed to the pilgrim trade. We conclude this because of it’s lack of finish: the horn mouthpiece is not polished and shows file marks, the grade of the briar is low with large pits whose fillings have since fallen out, the wood is enameled not polished and all the connectors are wooden or horn screws. Of interest is the lip on the horn bit, it is a button lip.