Royal Copenhagen, officially known as the Royal Porcelain Factory or Den Kongelige Porcelænsfabrik, has been making porcelain products in Copenhagen since May 1, 1775. In addition, for a fifteen year period beginning in approximately 1970, Royal Copenhagen also made pipes. 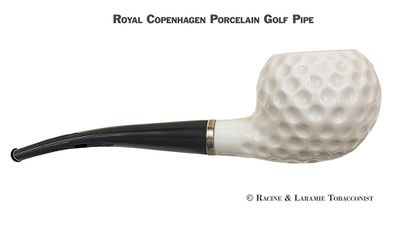 In honor of the 70th anniversary of King Frederik IX, himself an enthusiastic pipe smoker, the Royal Porcelain Factory produced a pair of porcelain pipes and a tobacco jar for the King. The pipes made for the King turned out so well that the factory decided to start mass production of porcelain pipes.

In 1970 the factory introduced a series of 8 porcelain pipes in classic shapes including a billiard, zulu, bent billiard and the like, as well as the very popular Golf Ball. Initial production resulted in complaints from customers regarding stem fit, as the initial traditional stem tenon loosened during smoking, allowing the bowl to fall off. After switching circa 1972 to a reverse tenon this problem was solved.

In fall of 1971, Royal Copenhagen decided to expand their line of shapes, and held a design contest, to which were invited Anne Julie, Emil Chonowitsch, Jess Chonowitsch, Poul Hansen, Gert Holbek, Lars Ivarsson, Sixten Ivarsson, Svend Knudsen, Ib Loran, Jørn Micke and Karl Erik Ottendahl. This preeminent lineup produced a total of 49 shapes which were judged anonymously. Micke's pipes took first and third and Ib Loran took second. With these three pipes, one from Lars Ivarsson, and four more purchased from Micke, the line was expanded.

Production of these pipes ceased in the mid-1980s after only approximately 15 years in production.