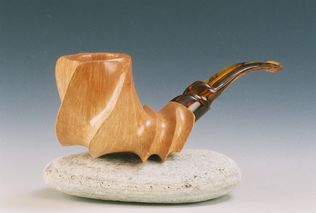 It would be great to see an overview of the history of pipe making in each region. Please feel free to contribute information to the individual sections. Many of the pipe makers still need bios or additional information and pictures (just click on them, and then select the Edit tab to add any information you have). Feel free to add other pipe makers you've a particular interest in or knowledge of. Please let me know if you need any help managing the wiki: mailto:sethile.pipes@gmail.com

Butz Choquin - France - BC Inside a circle: